I am trying to analyze the effect of an intervention on the same outcome in different countries. In addition, I want to control for other time-varying variables that could potentially affect the independent variable. For my analysis, I want to use R.

As the outcome was measured yearly, the different time series are rather short, ranging from 20 to 30 data points.

So far, my research has pointed me towards segmented regression analysis (e.g. Wagner et al., 2002; Bernal et al., 2017)however, as far as I understand, this method is considered rather weak and I haven't found any good explanations on how to control for possible confounders this way.

Unfortunately, I am a layman when it comes to time series analysis in general. I don't want to forecast data, I only want to estimate the effect the intervention had (or didn't have) on my dependent variable.

Can anyone point me towards helpful resources (articles, tutorials etc.) that not only offer code but also theoretical background?

The ultimate approach is to use a SARMAX model https://autobox.com/pdfs/SARMAX.pdf to form a useful equation leading directly to tests of statistical significance.

Note that there are two type of Intervention Variables , de jure and de facto . If you know the date and the type of Intervention then you are fundamentally specifying a de jure ( by law/supposition ) "X" variable. If you don't know ( or are not sure ) the date and type of intervention (de facto ...by fact ) then one needs to identify an "I" type variable using schemes following http://docplayer.net/12080848-Outliers-level-shifts-and-variance-changes-in-time-series.html.

In either case the X and the I appear/act as possible predictors in the final model possibly including ARIMA structure.

When forming a useful time series model (SARMAX) one needs to consider the following three components:

type 1. The contemporaneous and lag effects of known user-suggested predictor series . The are the X series.

type 2. The impact of unknown stochastic series whose impact can be proxied by the history of Y .This is the arima component .

One needs to efficiently combine three components by examining alternative scenarios/model and selecting the one that is minimally sufficient which is suggestd here http://www.autobox.com/pdfs/TRANSFER%20FUNCTION%20FLOW%20CHART.docx.

Attempting to identify type 2 effects (arima structure) in the presence of either type 1 or type 3 effects is not robust.

Attempting to identify type 3 effects via Intervention Detection procedures which assume that type 1 and type 2 are both nul is not robust.

What is required is a holistic approach /self-checking / self-improving sequence of heuristics which examine feasible combinations in a step-up and step-down manner culminating in a "possibly useful model".

There are two predictor series (POP and GDP ) for 24 consecutive years . 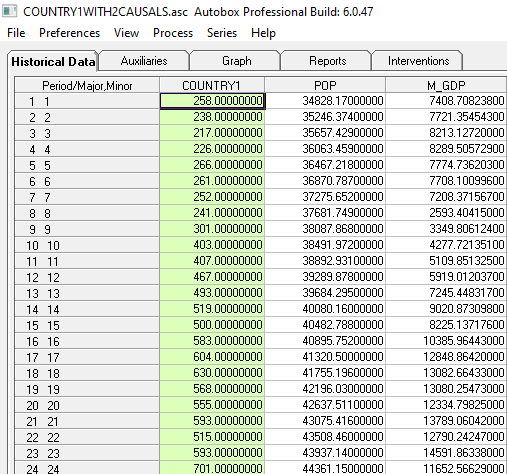 AUTOBOX ( a time series package that I have helped to develop ) was used to identify BOTH the regression effects for the two predictors AND any needed arima structure AND empirically identify any latent deterministic structure reflecting omitted variables such as law changes .

I am not an expert in the software you referenced but I don't believe it allows the inclusion of causals and their lags or an ARIMA structure as it goes about the business of identifying pulses and/or level/step shifts.

Here are the results 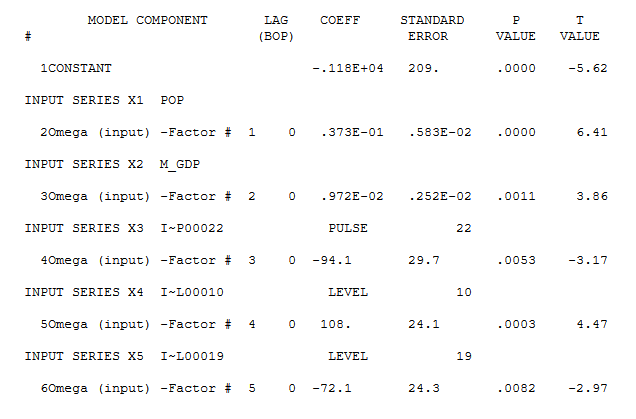 The coefficients in the model present the effects that you have asked for.

Here is the Cleansed Graph showing what occurred and what would have occurred had there been no level/step shifts.

In summary all software has limitations ... you just need to know what they are and not simply just press a button because very soon there will be a button to replace you !.

You might consider using synthetic control methods, which, according to their creators, "are particularly well-suited to investigate [the effects of interventions and other] events occurring at an aggregate level (i.e., countries, cities, regions, etc.) and affecting a relatively small number of units."

For the theoretical motivation and discussion of the relevant R package, Synth, see this article in the Journal of Statistical Software. The authors also presented the approach in a major political-science journal in 2015 (here). I used the approach to analyze the impact of coups on economic growth; you can find the GitHub repo for that project here, in case additional worked examples are helpful.

Not the answer you're looking for? Browse other questions tagged r time-series intervention-analysis or ask your own question.