Computation of the intercept in logistic regression model

I'm trying to understand the way the odds of the reference groups are computed. Let's consider an example from this paper. Data can be summarised in the table: 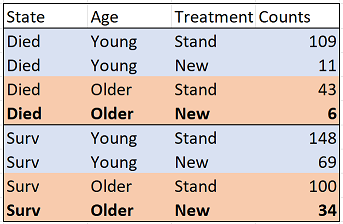 The reference group is Older and New. The authors run a logistic regression model and found that:

Essentially it's because of the way they parameterized the model. The model they used is

This model assumes that age and treatment have additive effects on the log odds of the outcome, meaning that whether you are old or young has no bearing on the effect of the treatment. It's not straightforward to compute the coefficients from the table because the effect of treatment "averages across" levels of age in a somewhat opaque way determined by the statistics behind how the coefficients are estimated. Rather than being directly computable from the table, the coefficients are estimated as those that make the data in the table most likely, again assuming additive effects of age and treatment. So the intercept represents the "model-implied" estimate of the log odds of the event for those that are older and received the new treatment.

In this model, there are four quantities being estimated. This model doesn't assume that the effect of treatment is consistent across levels of age. It allows for an interaction between treatment type and age, which is what the $\beta_3$ term represents. In this model, $\exp(\beta_0)$ is indeed equal to the empirical odds for the older group who received the new treatment. The model fits the data perfectly in that the model-implied odds are exactly equal to the empirical odds for each of the four groups.

We can see this using R: