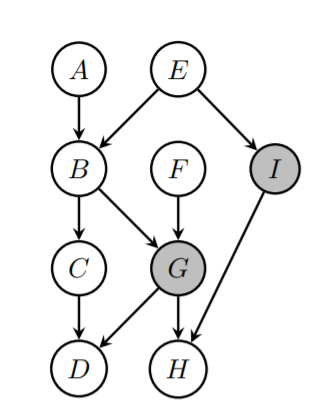 When I apply this definition, all I can find is that $H$ is d-seperated from $E$ given $I$ and $G$ (the paths are {$HGBE, HGDCBE, HIE$}. But this just seems intuitively wrong that given these two, nearly nothing is independent. I double checked for each variable but there's always a non blocking path. Why would $D$ for example be dependant since we know that it has a parent ($G$) that is in $C$.

The definition at point 1 talks about a collider (in this case, most of the time it is $B$, but this collider gets an arrow from $A$ which has nothing to do with the rest of the path. Should I reinterpret this definition? And what if there are multiple colliders like in the path $H-G-B-E$ where $H$, $G$ and $B$ are colliders. Should the rule apply to every one of them?

Browse other questions tagged deep-belief-networks conditional-independence or ask your own question.