I am working on an analysis seeking to predict early death which is defined as death within 3 months of the start of treatment. What is the best way to analyze this since there is censoring involved in this analysis (See subject S3 below). Specifically, per the picture below, in an analysis of early death, it is clear to me that:

Some thoughts about options to analyze this data appropriately include:

Analyzing this data with a multinomial model (S1=Yes, S2 and S4=No, S3=Not Evaluable) Analyzing this data with a binary model, excluding subject S3 Analyzing this as time to event data in some fashion. Although I think results will likely inform us of which subjects are more likely to early progress earlier, as opposed to which subjects are more likely to be early progressors. Applying an imputation strategy (e.g., MICE) to impute plausible values for early death in censored subjects. Would really appreciate any thoughts on this 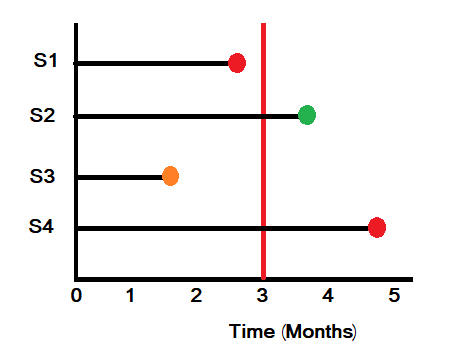 Use a standard Kaplan-Meier analysis to find the fraction of patients surviving to 3 months. The other methods described do not use all the data or misrepresent censored subjects. If you need to regress, consider a Cox regression and then fitting curves.

I assume you have some independent variables (predictors/covariates might be other terms you use) in which case a multivariable regression (likely a proportional hazards/Cox model) would be best. This however assumes you actually have time to event for each patient (i.e. censored at day 45, deceased at day 19, alive at 3 month follow up).

To really give a better answer you should describe more what your variables look like and your sample size.

What you can do will depend strongly on the numbers of events in the 0-3, 3-6, and 6+ month groups. If you have adequate numbers, say from a Medicare study of discharged patients, you could simply stratify the analysis by the time interval of events. The control populations would those persons who entered the followup period alive and remained alive or were censored (but known to have been alive at a later point). It's true that the control populations would a lot of overlap but that should not cause a problem. Your T_0 for each of these analyses will be the starts of the sub-u=intervals.

If your numbers are somewhat smaller then you will probably want to analyse the whole cohort but then study the constant proportionality hypothesis. Grambsch and Therneau's "Modeling Survival Data" has a whole chapter on such methods.

Not the answer you're looking for? Browse other questions tagged classification predictive-models survival or ask your own question.