So do we prefer this:

From my empirical results when creating an LSTM-autoencoder I've found them to be quite similar.

The purpose of the Rectified Linear Activation Function (or ReLU for short) is to allow the neural network to learn nonlinear dependencies.

Specifically, the way this works is that ReLU will return input directly if the value is greater than 0. If less than 0, then 0.0 is simply returned. The idea is to allow the network to approximate a linear function when necessary, with the flexibility to also account for nonlinearity. This article from Machine Learning Mastery goes into more detail on the same.

As for whether having an activation function would make much difference to the analysis, much of this depends on the data. Given that ReLUs can have quite large outputs, they have traditionally been regarded as inappropriate for use with LSTMs.

Let’s consider the following example. Suppose an LSTM is being used as a time series tool to forecast weekly fluctuations in hotel cancellations (all values in the time series are positive, as the number of cancellations cannot be negative). The network structure is as follows:

When the predictions are compared with the test data, the following readings are obtained:

Now, suppose that a ReLU activation function is invoked:

We see better performance on MFE and slightly worse performance for RMSE. That said, note the difference between the two graphs: 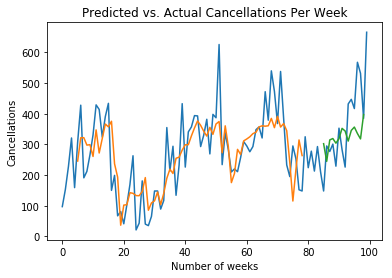 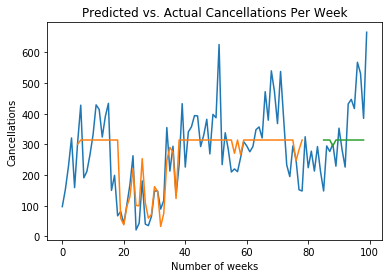 We can see that the predictions with ReLU flatten out the volatility in the time series. While this might result in better performance on some metrics (in this case RMSE), it also means that the network is not picking up the right volatility trends in the data as the activation function is not appropriate for the type of data under analysis. Therefore, superior performance for MFE becomes irrelevant under these circumstances.

In this regard, one should not use ReLU (or any activation function for that matter) blindly – it may not be appropriate for the data (or model) in question.

Not the answer you're looking for? Browse other questions tagged neural-networks lstm tensorflow recurrent-neural-network keras or ask your own question.

5
Neural net with hidden layer performing worse than without?
2
LSTM: doesn't forget gate interfere to input gate?
5
LSTM cell output activation for series
60
What is the definition of a "feature map" (aka "activation map") in a convolutional neural network?
3
Why do we need second tanh() in LSTM cell
1
Keras TimeSeries - Regression with negative values
1
Sequential Binary Imbalanced data classification with LSTM