Can I use the Anova (type II) to test significance in my negative binomial regression?

I have fitted a binomial regression in R using glm.nb from the MASS package.

I have two questions and would be very thankful if you could answer any of them:

1a) Can I use the Anova (type II, car package) to analyse which explanatory variables are significant? Or should I use the summary() function?

However, the summary uses a z-test which requires normal distribution if i am not mistaken. When looking at examples in books and websites, mostly summary has been used. I get completely different outcomes for Anova test and summary. Based on visualisation of the data I feel that Anova is more accurate. (i only get different outcomes when I have included an interaction).

1b) When using the Anova, both an F-test, chi-square test and anova (type 1) give different (but pretty similar) results - is there any of these tests that is preferred for a negative binomial regression? Or is there any way to find out which test represents the most likely results?

2) When looking at the diagnostic plots, my qq-plot looks kinda off. I am wondering if this is fine - since the negative binomial is different from the normal distribution? Or should the residuals still be normally distributed? 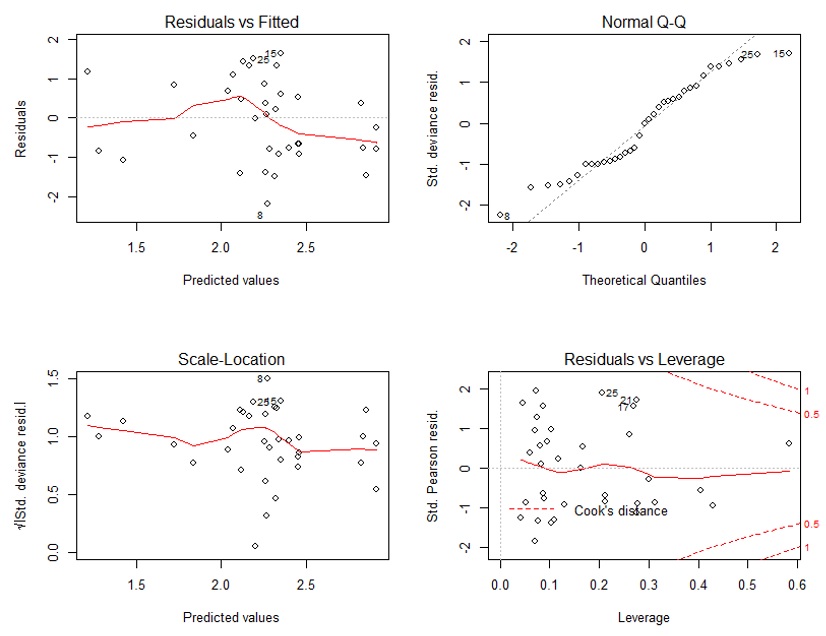 1(a) Anova() can be easier to understand in terms of evaluating the significance of a predictor in your model, even though there is nothing wrong with the output from summary().

The usual R summary() function reports something that can appear quite different from Anova(). A summary() function typically reports whether the estimated value for each coefficient is significantly different from 0. Anova() (with what it calls Type II tests) examines whether a particular predictor, including all of its levels and interactions, adds significantly to the model.

So if you have a categorical predictor with more than 2 levels summary() will report whether each category other than the reference is significantly different from the reference level. Thus with summary() you can get different apparent significance for the individual levels depending on which is chosen as the reference. Anova() considers all levels together.

1(b) I would avoid Type I tests even if they seem to be OK in your data set. In particular, results depend on the order of entry of the predictors into your model if you don't have what's called an orthogonal design. See this classic answer for an explanation of the different Types of ANOVA.

This answer nicely illustrates the 3 different types of statistical tests that are typically reported for models fit by maximum likelihood, like your negative binomial model. All of these tests make assumptions about distributions (normality or the related $\chi^2$), but these are assumptions about distributions of calculated statistics, not about the underlying data. Those assumptions have reasonable theoretical bases. As the answer linked in this paragraph puts it:

As your $N$ [number of observations] becomes indefinitely large, the three different $p$'s should converge on the same value, but they can differ slightly when you don't have infinite data.

Likelihood-ratio tests would probably be considered best, but any could be acceptable so long as you are clear about which test you used (and you didn't choose one because it was significant and the others weren't).

There is no reason to expect deviance residuals to be distributed normally in a negative binomial or other count-based model; see this answer and its link to another package that you might find useful for diagnostics. The other answers on that page, and this page, might also help.

I would be very careful using a function in a way that isn't explicitly described in the documentation. Many functions in R packages aren't necessarily fool-proofed. Case-in-point, car::Anova will accept clm model objects from the ordinal package, but it doesn't --- at least the last time I checked --- report the correct results for this. (Unless it is modified by the RVAideMemoire package.)

That being said, because the documentation for MASS::glm.nb says "The object is like the output of glm but contains three additional components...", Anova probably handles it correctly.

Note, for example, that the emmeans package explicitly lists the model objects it supports, including MASS::nb.glm.

Not the answer you're looking for? Browse other questions tagged r regression anova negative-binomial-distribution or ask your own question.

1
Can I use the Anova (type II) to test significance in my negative binomial regression?
99
Diagnostic plots for count regression
55
How to interpret type I, type II, and type III ANOVA and MANOVA?
47
Why do my p-values differ between logistic regression output, chi-squared test, and the confidence interval for the OR?
6
What is an orthogonal design?
5
Model validation after fitting a negative binomial GLM in R