I'm working on analyzing the performance of an algorithm under small perturbations to an input variable. I included some python code to help make my question more concrete, but in principle this is a question regarding variable transformations in regression analysis. 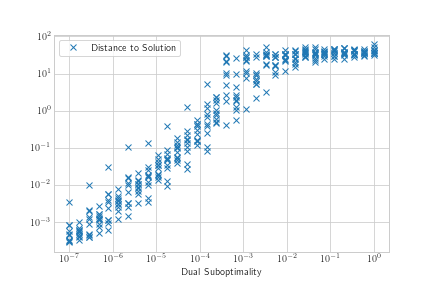 My x variable seems to have a log distribution, as does my y variable. The association in the loglog plot seems somewhat sigmoidal, but linear for a large section of my domain so I thought I would start by trying to add a linear regression line.

I realize the data is fairly noisy, so naively I tried to start by performing regression on just the means. 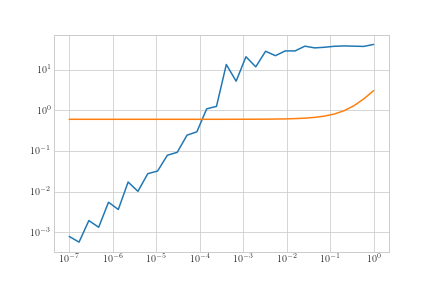 The results don't look great for exponential transform linear regression either. It doesn't seem like the regression is sensitive enough to the values close to 0. Should I try something like weighted least squares?

How do I need to transform my variables in order to perform a regression in this log space? I have tried to transform them by taking $10^x$ and $10^y$ to make them approximately linear, but have not had great results. Ideally, I might want to fit something like a logistic trend model, which could be achieved by replacing the "func" line with

Below, I model your log-transformed data as a (scaled) difference of two softplus functions, $y = log(1+e^x)$, plus a constant term:

This is a sigmoid function whose linearly rising part can be made as long as necessary: 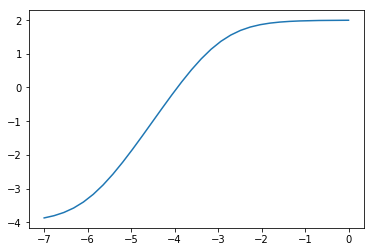 Here is my code:

and the fitted curve (red) and the initial guess (orange): 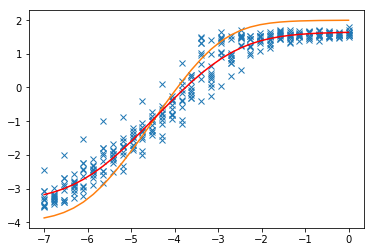 You are, of course, free to try out other sigmoid functions, especially if you have theoretical reasons to assume a particular form. In this case, the function I used seemed appropriate because of the long linear part in the middle.

And, of course, it is trivial to convert the fitted curve back to the original (non-transformed) scale: 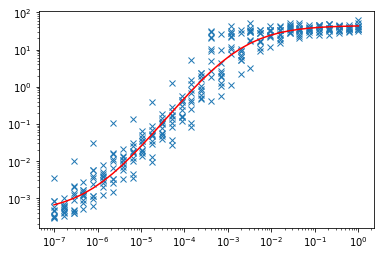 10
How to choose the best transformation to achieve linearity?
2
Interpretation of coefficient in log-linear model with share predictor
4
How to build a Bayesian regression model of a response that is a Gaussian mixture
2
Heckman Selection model based on logistic regression
2
Variable Transformation to find Regression Parameters
4
Logit transformation or beta regression for proportion data