Implication of marginal independence of features for classification

Edit: Let me provide a clarifying example. Let's assume that rather than having discrete features like the presence of the word "buy" or "cheap", I have some continuous features $B$ and $C$ (e.g., the normalized frequency of the occurrence of the each of the words within an email) whose true joint distribution $P(B,C)= \sum_{S\in\{0,1\}}P(B,C|S)P(S)$ is illustrated below. (This is the distribution with which the data was truly generated.) 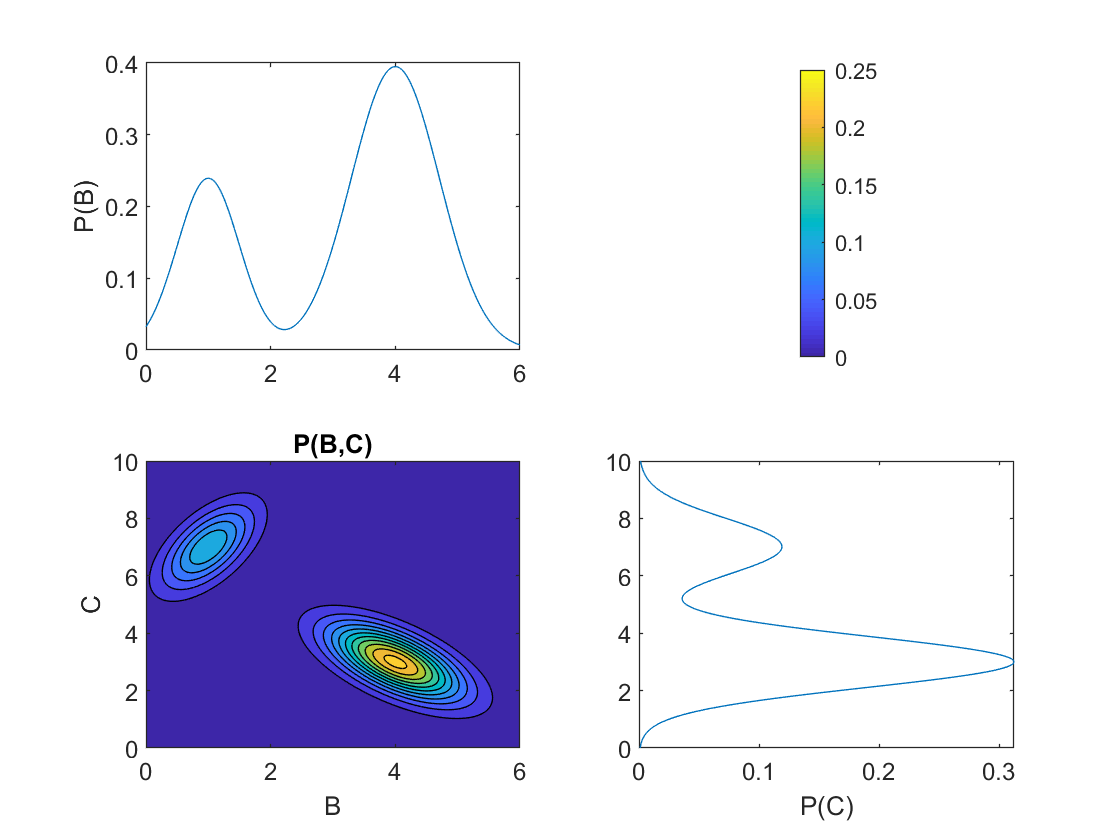 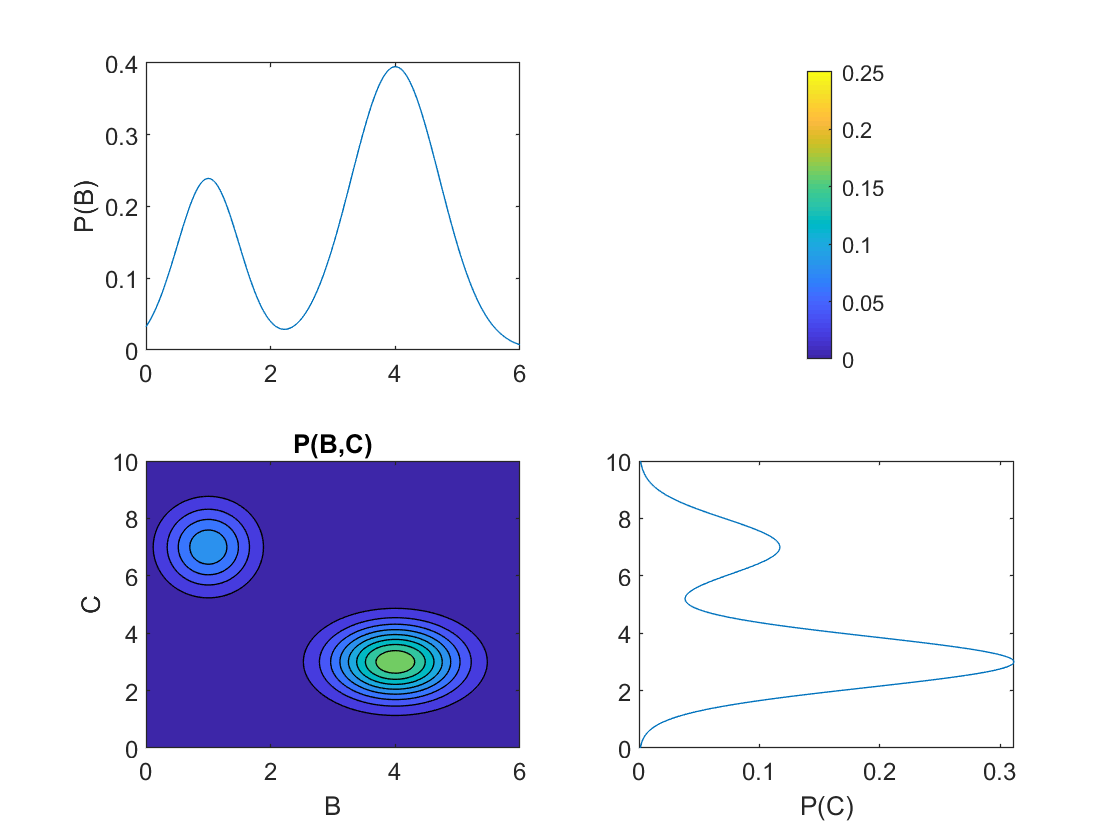 We have effectively zeroed out correlations between $B$ and $C$ within each class $S$ by computing the product of the two marginal distributions $P(B|S)$ and $P(C|S)$ of $P(B,C|S)$. If we were to fit a Gaussian model to the data from each class and we assumed that the covariance within a class was diagonal, this is what we would get. Note that the marginal distributions $P(B)$ and $P(C)$ (not conditioned on $S$) are still the same, which is expected since each class-conditional distribution is bivariate Gaussian and we're still averaging them using the same $P(S)$ as before.

The NB independence assumption is class-conditional, which means that we break the dependence between $B$ and $C$ within each class. This is a reasonable assumption to make since the two classes are easily distinguished by the values of $B$ and $C$; i.e. knowing the correlation does not buy us much. If, instead, the means were equal, and, moreover, the correlations were the same in magnitude but opposite in sign for the two classes, then, assuming class-conditional independence would mean assuming the generating distributions for both classes are the same (since the product of the marginals would be the same). This would prevent us from being able to distinguish $S=0$ from $S=1$, and therefore, in that situation, the NB assumption would not be a good choice.

If we were instead to assume marginal independence between $B$ and $C$, the joint distribution $P(B,C)=P(B)P(C)$ would look like: 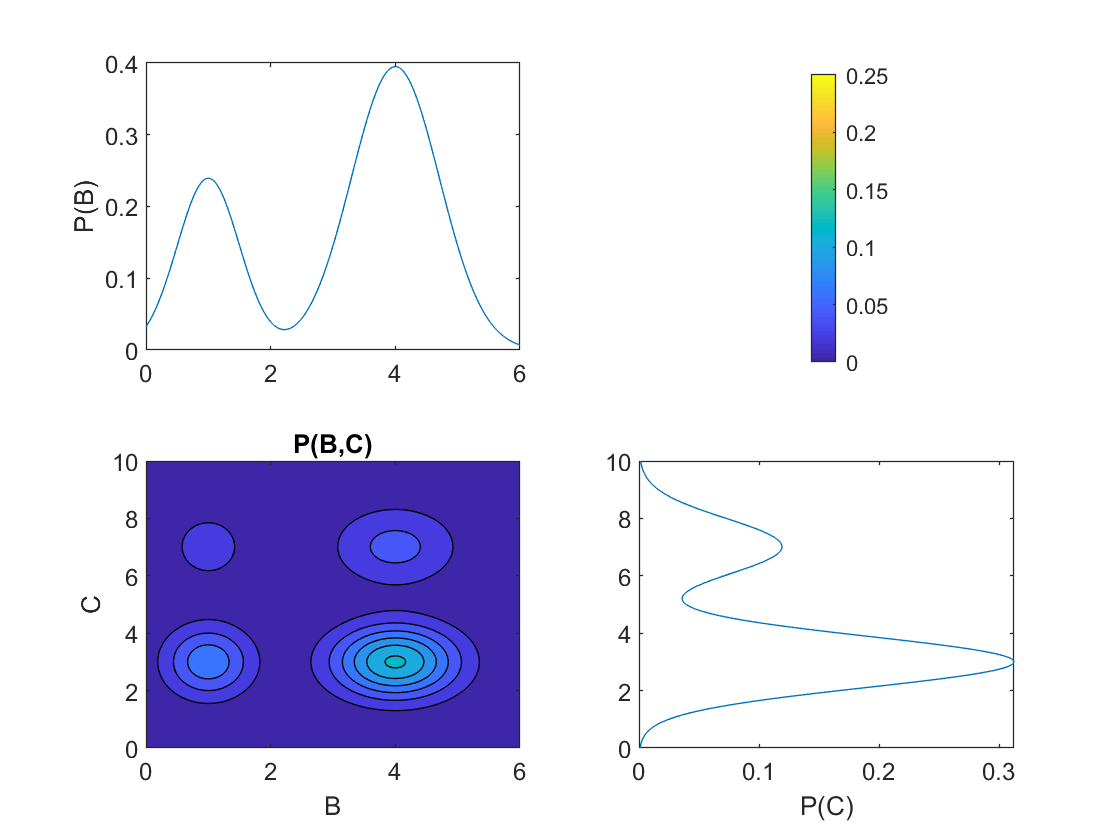 This is where I am confused. If I had made this assumption instead, how does this tie back into classifying whether $S=0$ or $S=1$? From the data generating model (first figure), $B$ and $C$ clearly follow different distributions for each class, but here, I feel like I've lost any notion of which class the features belong to because the distributions are mixed. Another way of asking this is, if this were the data generating distribution, what do $P(B,C|S=0)$ and $P(B,C|S=1)$ look like? Or, to rephrase my original question, if the assumption that $P(B,C)=P(B)P(C)$ were reasonable, what does this imply about $P(B,C|S)$ and the ability to distinguish $S=0$ and $S=1$ using $B$ and $C$?

MATLAB code for generating the above figures is given below.

The problem in your last setting is that you don't specify $S$. In a (supervised) classification problem, $S$ is given. If $S$ is not given, you don't know what it is, and it can basically be anything. In the last example you have four (more or less) high density areas, which I call UL, UR, LL, LR (upper left, upper right, lower left, lower right). Now it could be that you have $S=1$ in UL and UR, in which case you in fact have class-conditional independence, but it could also be that you have $S=1$ in UL and LR, in which case there is dependence within classes, or $S=1$ just in LR, in which case the $S=0$ class has within-class dependence.

In fact the distribution of $B$ and $C$ doesn't imply anything about $S$ (so the answer to your question is "no"); even in your earlier examples both clearly visible "clusters" could have instances of both $S=0$ and $S=1$, despite the fact that intuitively it looks most likely that they correspond to the classes. Obviously here in fact you generated them artificially knowing the true classes, so you created this correspondence by actually specifying $S$ (you could however, as weird as it seems, have chosen $S$ so that conditionally on $S=1$ you have a mixture of two disjointed half normals, and for $S=0$ you take the other halves so that they give your two normals setup when put together). In theory there's nothing stopping you from doing that. In reality more often than not chances are that for such data there will be correspondence, however this is not a necessity and there are counterexamples (for example your two classes may be two different species of a genus, but on the observations that you have, male and female individuals may be clearly separated (in which you in this example are not interested) whereas the species may not be. Also, as in your last example, there may be classes that consist of separated subclasses, without any guarantee how these are located with respect to each other.