I have three sources, and all of them describe different DAG structures, and yet all claim that exactly their structure is the reverse causality: 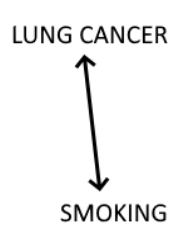 Which of them is correct?

Reverse causality is particularly problematic for DAGs because it often implies either a reversal of a causal path, or feedback loop (which would make it a Directed Cyclic Graph) rendering the usual DAG analysis invalid.

Nevertheless, a lot can still be said using DAGs even where reverse causality is present or suspected. You say

yet all claim that exactly their structure is the reverse causality:

In the first case, I don't agree that this is reverse causality. Renal failure and analgesics are both caused by diabetes and so this is a case of confounding, not reverse causality. I don't see any justification for drawing the arrow in the direction that they did. I would expect the dotted line to have no arrowhead at all, indicating that the two are correlated.

In the second case, the DAG a generic one, often seen in cases of unmeasured confounding. Again, I don't agree that there is any reverse causality, even from their description:

subclinical disease U results both in lack of exercise A and an increased risk of clinical disease Y . This form of confounding is often referred to as reverse causation when L is unknown.

I don't agree with this. When L is also unobserved, U directly causes A and Y, which again is they standard definition of confounding. For a higher U, there is lower exercise and increased risk of death, Y. I don't see any reverse causality in this argument.

The third case is interesting because it has a bidirectional arc (causal effect pointing in both ways, which means it is not a DAG. Anyway, that is what I usually understand as reverse causality. Smoking causes cancer later in life. This is uncontroversial. However, a smoker who is diagnosed with lung cancer then reduces or stops their smoking as a direct consequence of being diagnosed, hence the arrow is also pointing the other way. One way to understand this is to realise that it isn't Lung Cancer itself which causes them to stop smoking. It is the diagnosis. Lung Cancer was already present before the diagnosis. The diagnosis is also not caused by lung cancer, rather it is the symptoms that lung cancer causes which then cause the patient to get the diagnosis, and it is the diagnosis which causes the reduction or cessation of smoking: 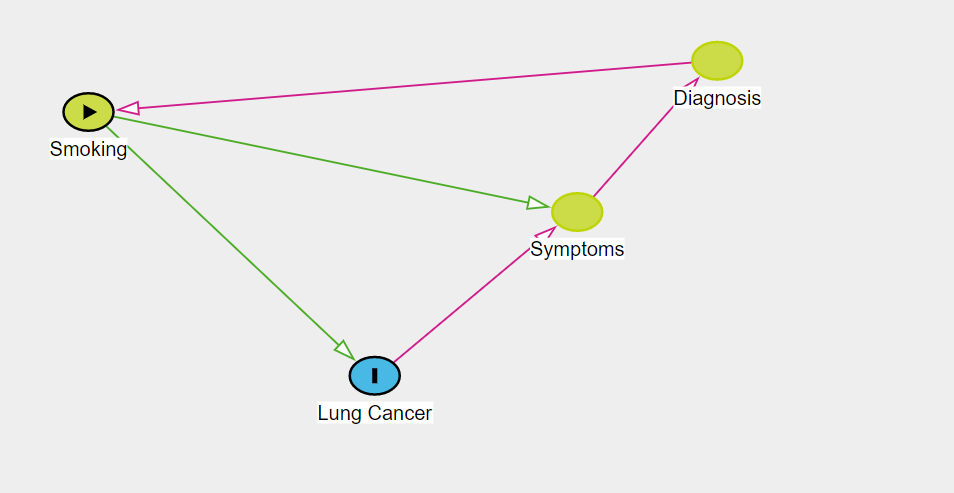 Of course this is still a problem in DAG theory because we now have a feedback loop due to diagnosis causing smoking. One way to resolve this is to split the smoking variable into Smoking prior to diagnosis and smoking after diagnosis: 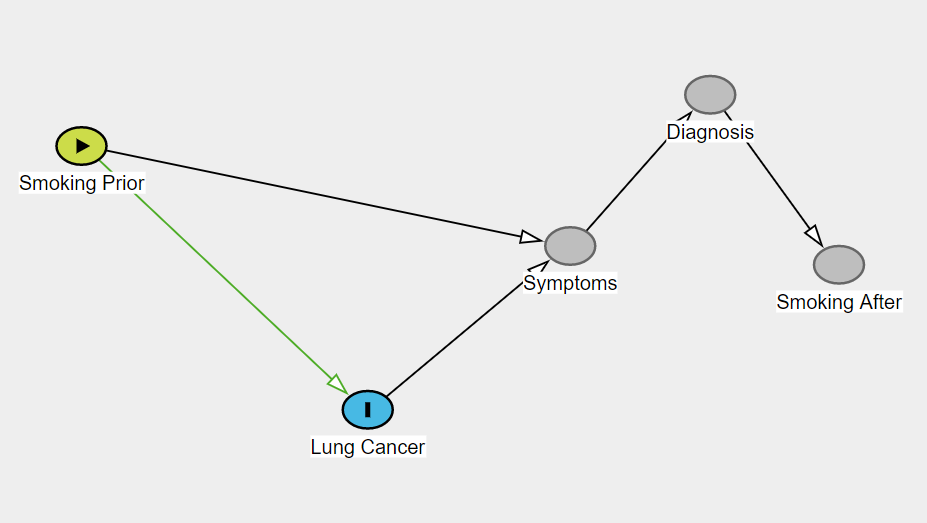 One advantage to this, other than preserving the acyclicity, is that it preserves the temporal nature of the DAG - that is, variables occurring earlier in time are on the left and those occurring later are on the right. This explicitly recognises one of the defining characteristics of causality: In order for something to be a cause, it MUST occur before the thing which it is a cause of. This isn't something that is enforced in DAG theory, but it is a very good practice that can help in situations like this.

Not the answer you're looking for? Browse other questions tagged causality definition dag or ask your own question.

25
Representing interaction effects in directed acyclic graphs
5
reverse causality and endogeneity problems
1
Reverse causality
18
Is it appropriate to use "time" as a causal variable in a DAG?
8
Convincing Causal Analysis using a DAG and Backdoor Path Criterion
3
Using residuals in 2SLS regression to remove reverse causality
5
causal graph - counting the number of backdoor paths in a DAG