Can someone explain to the Gini Index for a tree?

So I know what the formula for the Gini index. However, I have a few questions that I am hoping to clarify. I saw this, which tells you how to calculate the Gini index for each feature: Computing the Gini index

The Gini index is always computed on the TARGET variable, not the predictors, as it tells us how "pure" our node is based on the classes of the target variable. To know the Gini Index of a node, the predictors are irrelevant.
Predictors become relevant when we want to split, as we evaluate every possible split of every possible predictor, every time obtaining two child nodes, for which we compute the Gini (once again, only looking at the target variable).

By looking at the link you added, I can see how it can be confusing, as the author asked the gini index to be computed for some predictors instead than for the target class. That is something you can do of course (Gini is just a function you compute on categorical data), but it has no application in CART.

As before, I think you got confused from the link. Gini is an impurity index that is used for classification and it therefore cannot be applied to continuous variables, as one would do regression in those cases instead. In the example you give (from the link) however, one could interpret the integer values of the $a_3$ variable as classes, and use that variable as categorical. This would be an example of multiclass classification with very sparse data. Even though I think this has little impact in most actual problems, the answer is yes, in such sparse cases the node would be very impure, and Gini would approach $1-\frac{1}{n}$, which is its maximum.

Yes, that is correct. We take the split that gives us the biggest decrease in Gini, by subtracting the Gini of the original node and the weighted mean of the two children nodes.

Again, what we are doing is increasing the homogeneity of the nodes based on the target variable!. Which means that we want (hypothetically) to have nodes that only contain elements of one target class. Indeed, Gini and Misclassification Error (which is 1-Accuracy) are maximised and minimized for the same points. In particular, Gini is 0 when we are not misclassifying any element, and it is maximum when we are misclassifying half of them (in a 2 class setting, or $\frac{n-1}{n}$ in an $n$ class setting). 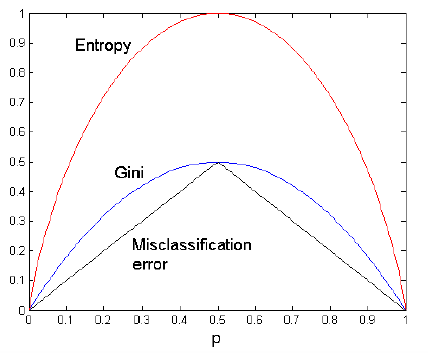 The reason we use Gini instead of Misclassification Error during the splits is that Gini is strictly concave, and this allows us to have better splitting properties. In particular, If we split a node (imagine target classes are $[20,50]$) and the majority class stays the same in the children nodes (imagine the new nodes have $[20,30]$ and $[0,20]$) then the misclassification error stays the same, and we have no decrease even though our split is clearly making some progress (before and after the split we are still misclassifying $20$ elements out of the total $70$). Gini, being concave, takes this into account, and the Gini difference before and after a split is NEVER zero for non-trivial splits (i.e. it is only zero if the split is not actually separating anything). 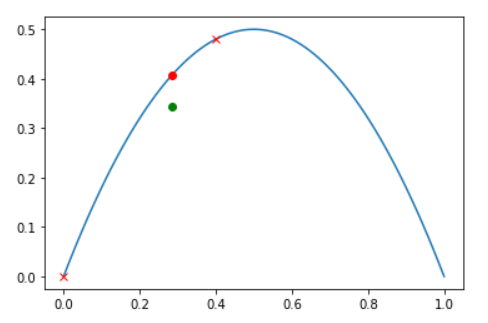 Here's an image of the gini index curve and the orginal node of the example (red dot), the final nodes (red crosses), and the weighted average (green dot). We therefore have a decrease from the two dots.

Not the answer you're looking for? Browse other questions tagged cart gini or ask your own question.

8
How is the Weighted Gini Criterion defined?
3
The efficiency of Decision Tree
1
Number of all possible splits in each node of trees in a Random Forest
0
Gini index in classification tree
0
What is minimized/optimized when we use AdaBoost