Logic for Poisson approximation to Binomial

If $X$ and $Y$ are random variables distributed as Poisson and binomial with parameters $\lambda$ and ($n$, $p$) respectively, then according to Casella and Berger (of Statistical Inference) 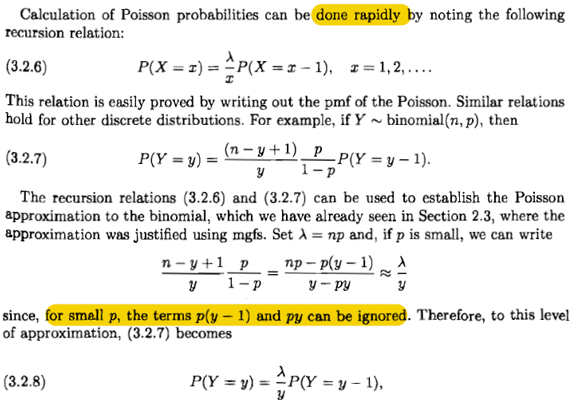 Could you please explain:

In any case, the point of the math isn't that there is some magic number $c$ where everything suddenly works if $p < c$, it's that as $p$ gets smaller, the error in ignoring the two terms referred to goes to zero, and you are left with equation 3.2.8.

Edit (in response to comments):

The approximation of the Binomial by the Poisson, and the rapid calculation of Poisson probabilities using the recursion described in the question, are not typically of computational importance, as computers are more than fast enough to handle the calculations involved in all but extreme cases (which may exist only in my imagination.) Even when building generalized linear models, if you really want to, you can use a log link with the Binomial distribution (the default link for a Poisson distribution) - admittedly risking an invalid $p\geq 1$ at some step of the iteration, which shouldn't occur if $p$ really is "small". Consequently, there's usually little to be gained by using the Poisson in this type of application.

From a modeling perspective, it's going to be application-specific; in most cases, our models are only approximate anyway, and a little extra approximation of the Binomial by the Poisson may well be swamped by the initial approximation of the data generating process by a Binomial. I personally almost never run into situations where I have Binomial variates that I'd like to model, and insofar as the Poisson is concerned, I can only remember one situation in many years of applied work where the Poisson itself was a good choice, w/o any noticeable overdispersion, as a likelihood function in a generalized model. So I can't give any rules of thumb, at least not ones where someone wouldn't be able to provide a counterexample.

From a mathematical perspective, the approximation of the Binomial by the Poisson is a simple, and good, example of a technique of "ignoring (relatively) small numbers that go to zero anyway" that gets used quite a lot, so provides a good introduction to the ideas of limiting distributions and simplifying approximations and how the associated math works.