I also see the term “backdoor path” a lot.

How do we use DAGs to reduce these biases, and how does it relate to backdoor paths ? Extra points (I will award a bounty) for real world examples of the above

A DAG is a Directed Acyclic Graph.

A “Graph” is a structure with nodes (which are usually variables in statistics) and arcs (lines) connecting nodes to other nodes. “Directed” means that all the arcs have a direction, where one end of the arc has an arrow head, and the other does not, which usually refers to causation. “Acyclic” means that the graph is not cyclic – that means there can be no path from any node that leads back to the same node. In statistics a DAG is a very powerful tool to aid in causal inference – to estimate the causal effect of one variable (often called the main exposure) on another (often called the outcome) in the presence of other variables which may be competing exposures, confounders or mediators. The DAG can be used to identify a minimal sufficient set of variables to be used in a multivariable regression model for the estimation of said causal effect. For example it is usually a very bad idea to condition on a mediator (a variable that lies on the causal path between the main exposure and the outcome), while it is usually a very good idea to condition on a confounder (a variable that is a cause, or a proxy for a cause, of both the main exposure and the outcome). It is also a bad idea to condition on a collider (to be defined below).

But first, what is the problem we want to overcome? This is what a multivariable regression model looks like to your statistical software: 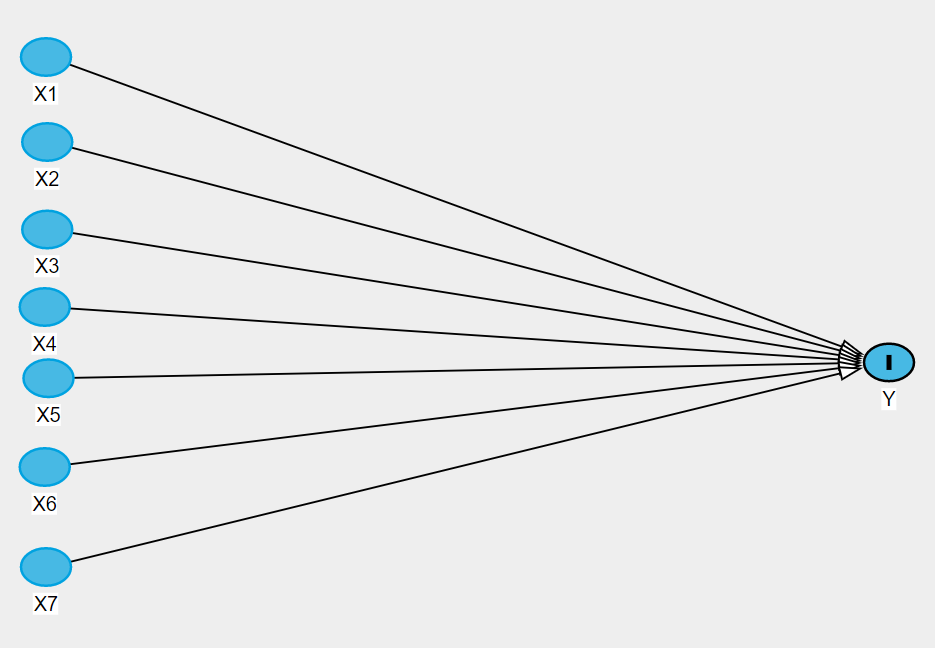 The software does not “know” which variables are our main exposure, competing exposures, confounders or mediators. It treats them all the same. In the real world it is far more common for the variables to be inter-related. For example, knowledge of the particular area of research may indicate a structure such as: 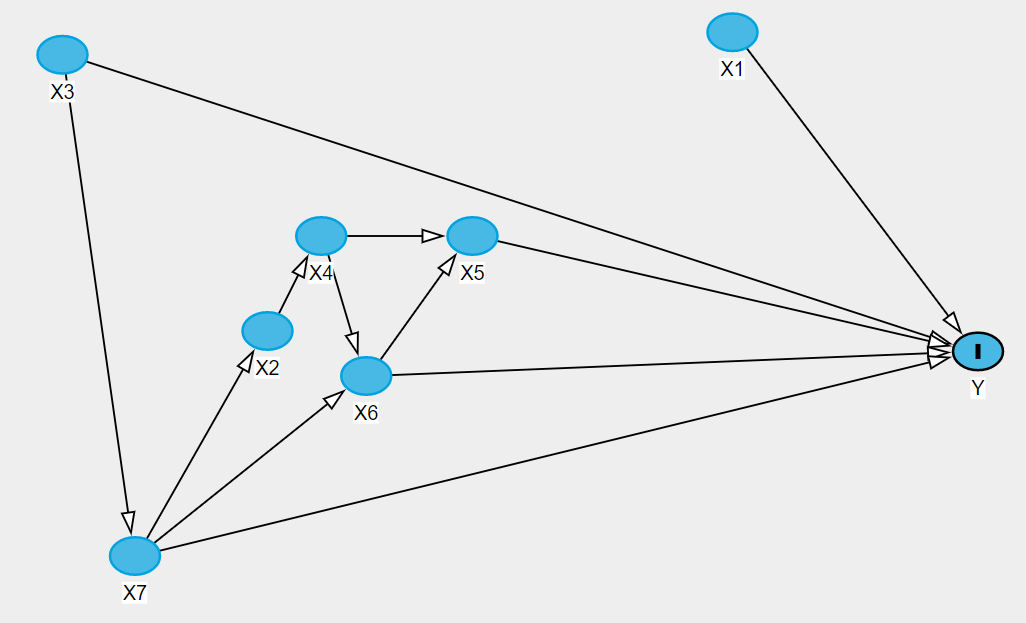 Note that it is the researchers job to specify the causal paths, using expert knowledge about the subject at hand. DAGs represent a set of (often abstracted) causal beliefs pertinent to specific causal relationships. One researcher's DAG may be different to another researcher's DAG, for the same relationship(s), and that is completely OK. In the same way, a researcher may have more than one DAG for the same causal relationships, and using DAGs in a principled way as described below is one way to gather knowledge about, or support for a particular hypothesis.

Let’s suppose that our interest is in the causal effect of $X7$ on $Y$. What are we to do? A very naive approach is simply to put all the variables into a regression model, and take the estimated coefficient for $X7$ as our “answer”. This would be a big mistake. It turns out that the only variable that should be adjusted for in this DAG is $X3$, because it is a confounder. But what if our interest was in the effect of $X3$, not $X7$ ? Do we simply use the same model (also containing $X7$) and just take the estimate of $X3$ as our “answer”? No! In this case, we do not adjust for $X7$ because it is a mediator. No adjustment is needed at all. In both cases, we may also adjust for $X1$ because this is a competing exposure and will improve the precision of our casual inferences in both models. In both models we should not adjust for $X2$, $X4$, $X5$ and $X6$ because all of them are mediators for the effect of $X7$ on $Y$.

So, getting back to the question, how do DAGs actually enable us to do this? First we need to establish a few ground truths.

So, armed with this knowledge, let’s see how DAGs help us with removing bias:

The definition of confounding is 6 above. If we apply 4 and condition on the confounder we will block the backdoor path from the outcome to the cause, thereby removing confounding bias. The example is the association of carrying a lighter and lung cancer: 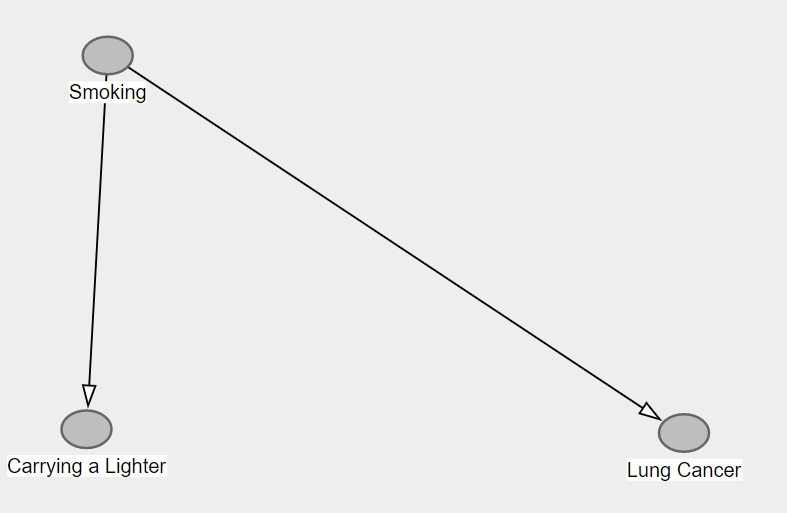 which shows the spurious association between Lighter and Cancer, but now when we condition on Smoking:

A mediator is a variable that lies on the causal path between the cause and the outcome. This means that the outcome is a collider. Therefore, applying rule 3 means that we should not condition on the mediator otherwise the indirect effect of the cause on the outcome (i.e., that mediated by the mediator) will be blocked. A good example example is the grades of a student and their happiness. A mediating variable is self-esteem: 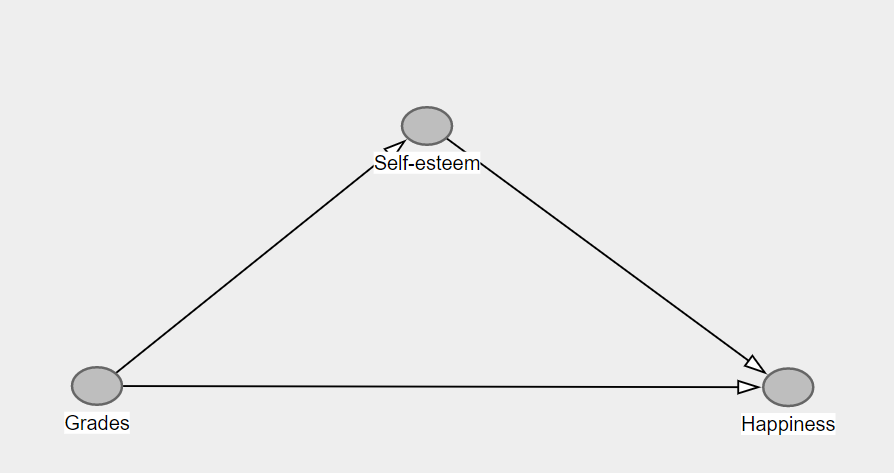 Here, Grades has a direct effect on Happiness, but it also has an indirect effect mediated by self-esteem. We want to estimate the total causal effect of Grades on Happiness. Rule 3 says that a path that contains a non-collider that has been conditioned on is blocked. Since we want the total effect (i.e., including the indirect effect) we should not condition on self-esteem otherwise the mediated path will be blocked, as we can see in the following simulation:

So the total effect should be 2:

which is what we do find. But if we now condition on self esteem:

only the direct effect for grades is estimated, due to blocking the indirect effect by conditioning on the mediator SelfEsteem.

This is probably the most difficult one to understand, but with the aid of a very simple DAG we can easily see the problem: 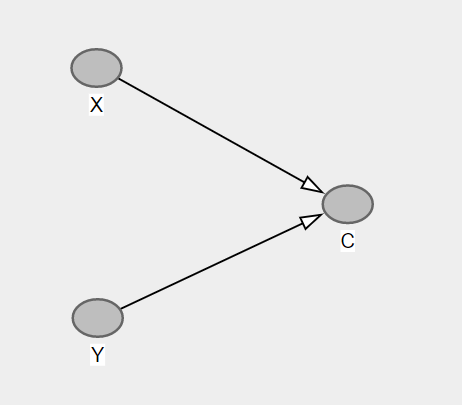 Here, there is no causal path between X and Y. However, both cause C, the collider. If we condition on C, then applying rule 4 above we will invoke collider bias by opening up the (non causal) path between X, and Y. This may be a little hard to grasp at first, but it should become apparent by thinking in terms of equations. We have X + Y = C. Let X and Y be binary variables taking the values 1 or zero. Hence, C can only take the values of 0, 1 or 2. Now, when we condition on C we fix its value. Say we fix it at 1. This immediately means that if X is zero then Y must be 1, and if Y is zero then X must be one. That is, X = -Y, so they are perfectly (negatively) correlated, conditional on C= 1. We can also see this in action with the following simulation:

So, X and Y are independent so we should find no association:

and indeed no association is found. But now condition on C

and now we have a spurious association between X and Y. 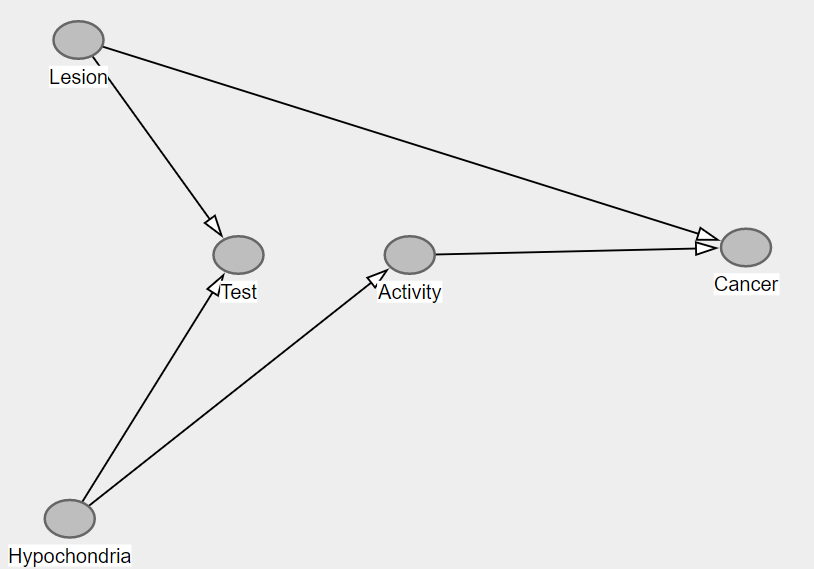 Here we are interested in the causal effect of Activity on Cervical Cancer. Hypochondria is an unmeasured variable which is a psychological condition that is characterized by fears of minor and sometimes non-existent medical symptoms being an indication of major illness. Lesion is also an unobserved variable that indicates the presence of a pre-cancerous lesion. Test is a diagnostic test for early stage cervical cancer. Here we hypothesise that both the unmeasured variables affect Test, obviously in the case of Lesion, and by making frequent visits to the doctor in the case of Hypochondria. Lesion also (obviously causes Cancer) and Hypochondria causes more physical activity (because persons with hypochondria are worried about a sedentary lifestyle leading to disease in later life.

And indeed we obtain a reasonable estimate.

Now, also observe the association of Activity and Cancer with Test (due to their common, but unmeasured causes:

Now not only is the estimate for Activity biased, but it is of larger magnitude and of the opposite sign!

The preceding example can also be used to demonstrate selection bias. A researcher may identify Test as a potential confounder, and then only conduct the analysis on those that have tested negative (or positive).

So for those that test positive we obtain a very small positive effect, that is not statistically significant at the 5% level

And for those that test negative we obtain a very small negative association which is also not significant.

This is generally a fairly elaborate topic, and may require more reading on your part for better understanding, but I will try to answer a couple of your questions in isolation and leave references for further reading.

Consider the example below:

Controlling for the confounding variable "Gender" gives us more information about the relationship between the two variables "Drug" and "Recovery". You can, for example, control for the confounder Z as a covariate (by conditioning) in regression analysis, and this will reduce your bias – as you know more about the effect of X on Y.

As mentioned here, conditioning on a collider can actually increase bias. Consider the example below 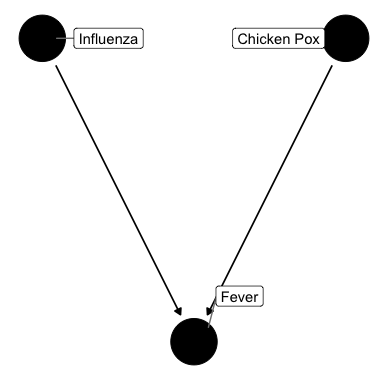 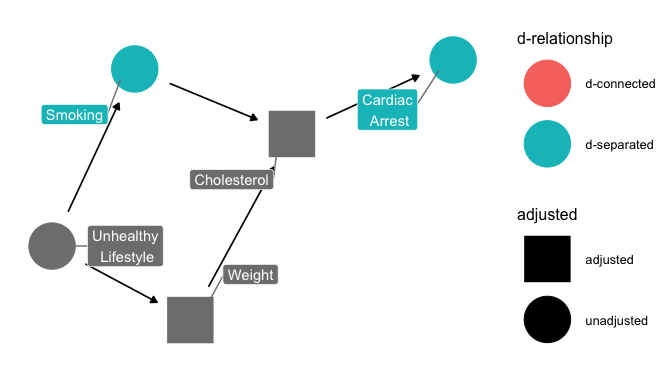 Backdoor paths generally indicate common causes of A and Y, the simplest of which is the confounding situation below. You may want to look at the backdoor criterion [Pearl, 2000] to see whether eliminating the confounding variable is reasonable for a particular case.

I also wanted to mention that the algorithms for statistical learning on DAGs reduce bias through regularization, see (this) for an overview. When learning on DAGS you can end up with highly complex relationships between covariates which can result in bias. This can be reduced by regularizing the complexity of the graph, as in [Murphy, 2012, 26.7.1].

Hope this provides you with enough to chew on for now..

It constraints the hypothesis space to hypothesis that imply the causation graph. It is like injecting domain knowledge in your model, so that the learning phase is more informed.

This can be modelled (in a very abstract way) by the VC-dimension of the model, or the PAC framework in general

Not the answer you're looking for? Browse other questions tagged inference causality dag or ask your own question.

0
Why should we care about DAGs for causal inference?
25
Representing interaction effects in directed acyclic graphs
6
Can we remove significant variables in a regression?
12
is it always "no causation without manipulation"?
7
Recurring problem with retrospective data collection study designs I'm seeing
5
How do I treat my Confounding variables in my multivariate Linear Mixed Model?
7
DAG: no back-door paths but background information shows a need for adjusting
4
mediation vs interaction - R application
4
Apparent anomaly in coefficients in multinomial logistic regression
3
Perform regression with lot of variables (alternative to stepwise)
See more linked questions