I am using lmer() (lme4 package) in r to test whether a hormonal factor (x) predicts score on a mental health scale (y). I am using linear mixed models rather than a standard GLM because the outcome score is provided by 2 raters (i.e. multiple response data). My baseline model consists of 3 fixed factors: age (continuous), sex (m/f) and rater (person 1/person 2) and I would like to include my primary variable of interest, x, in a subsequent model.

My question is: how should I include x as an ordinal variable when x is very differently distributed among males and females (see density plots below).

Let's say I split the hormonal variable x into quartiles...

Should I create quartiles on the entire sample (top plot)? Thus resulting in 0 females in the top quartile & few males in the bottom quartile (a problem when it comes to group interactions)?

Or can I create sex-specific quartiles (middle plot for females; bottom plot for males)? And can these sex-specifc rankings...

... be merged into one group variable with just 4 response options (Q1, Q2, Q3, Q4) & included as a predictor in our linear mixed model?

I imagine there is something wrong with doing it the latter way (sex-specific quartiles) but I don't know what exactly that is. Is it a comparable issue to including a continuous variable that has been standardised within each sex but entered as 1 variable?

The ultimate aim is to compare models without x (Model 0) and with x (Model 1) and in subsequent models, to add interaction terms such as the x:sex interaction. 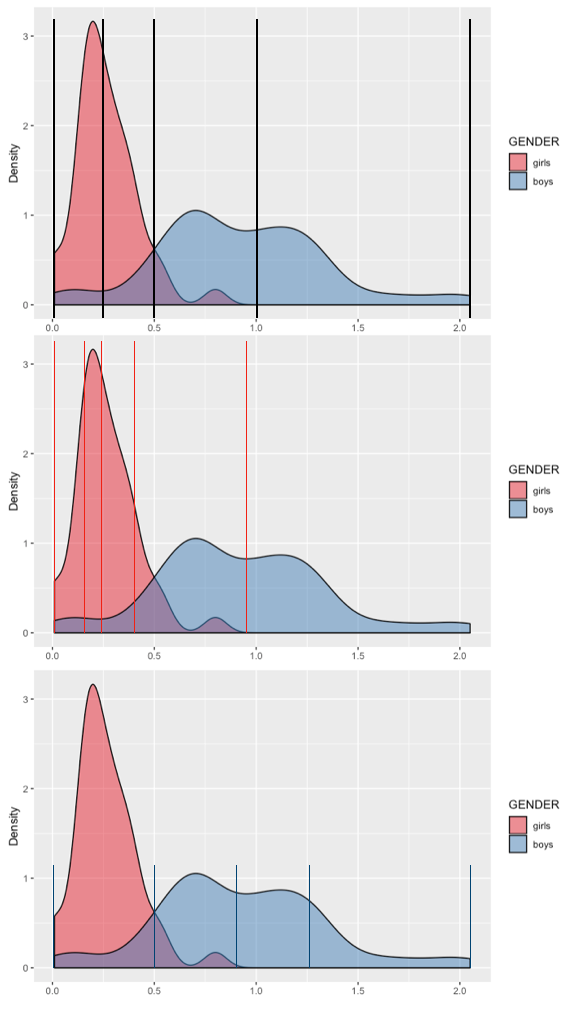 (This data has previously been discussed with regards to its random effects on this thread: Mixed Model using lme4 in R for multiple response data )

Most statisticians will tell you that categorizing a continuous variable is a bad idea, and I generally agree with that. In your case, you can allow the effect of continuous x to vary by a person's gender. This would then induce separate slopes of x for males and females as well as intercept values for males and females at x==0. It preserves all the information contained in the continuous measure of x. In terms of modeling in lme4, it is straightforward:

On the other hand, if you keep x continuous, you can use ggeffects or effects to plot the interaction to aid in interpretation$^*$:

This will produce a nice plot that shows you the model-implied marginal association between x and y for males and females. See extensive documentation for ggeffects here.

$^*$You can also use ggeffects for plotting the interactions if you categorize x.

Not the answer you're looking for?Browse other questions tagged mixed-model lme4-nlme interaction quantiles or ask your own question.