The interquartile range is defined as the difference between the third and first quartiles:

For quartiles (or quantiles in general), this is not the case: two interquartile ranges cannot be summed together. Obviously, quantiles are summary statistics on observed variables, not directly-observed variables. Nevertheless, what kind of algebraic proof can we give to justify the fact that two interquartile ranges cannot be summed?

My intuition is that the growth of a variable across space or time is structurally different from the deltas between quantiles across a population, but I would really like to find a more robust justification for this intuition, backed by standard equations.

For example, on one hand, computing the mean of two IQRs is arithmetically valid, but whether it makes sense or not from a statistical analysis standpoint is probably open to debate. On the other hand, computing the sum of two IQRs not only makes no statistical sense, but it's also probably arithmetically invalid (this is the part that I would like to firmly establish).

How can one know that something probably makes no sense? Simply by the fact that nobody ever came up with a valid example for which it would make sense.

Now, it is obvious that the IQR is not additive, in the sense that in most cases:

But this does not establish that two IQRs should never be summed.

Or does it? In other words, can we find a summary statistic $S$ for which:

I'm not sure I understand your question. I'll assume it can be reformulated as:

Why is the sum of the IQRs of two random variables not the IQR of their sum?

In that case, the answer is very simple: Why should it be?

It is easy to find a counterexample. Assume you have two standard uniform random variables, $X, Y \sim U(0, 1)$. The IQR of each of them is $0.5$. But, the variable $Z = X+Y$ is not uniformly distributed. Its PDF is a convolution of the PDFs of $X$ and $Y$ and has a triangular form: 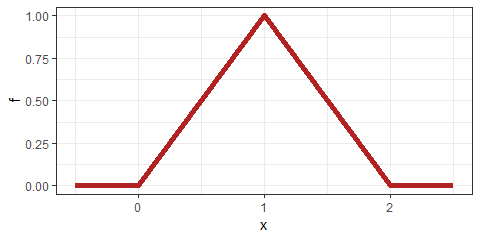 Not the answer you're looking for? Browse other questions tagged interquartile or ask your own question.