How to make inferences on group SD and and the SD of the group SD in a hierarchical Bayesian model?

The hierarchical model specified below is quite "standard" and easy to implement in for example JAGS/BUGS. It has an hierarchical gamma prior on the subject's precisions ($\tau_j$) which in turn has gamma priors on its mean ($m$) and SD ($d$). After having fitted this model I have access to estimates of the mean group precision ($m$) and SD of the group precision ($d$) but I rather make inferences on the natural scale. That is, the mean group SD and the SD of the group SD.

How can I make inferences on the mean group SD and the SD of the group SD from such a model? Is it at all possible? 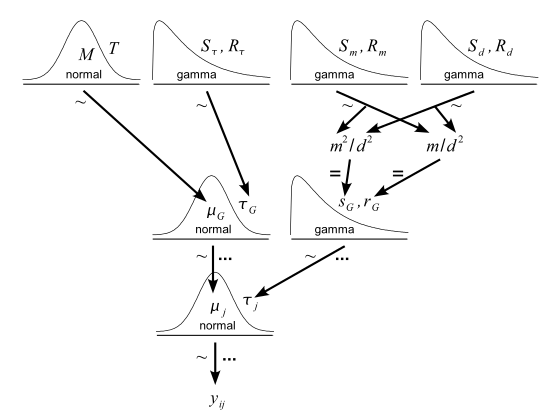 And here is the corresponding BUGS code:

One solution would perhaps be to not put the hyperpriors on the precision ($\tau_j$) but rather on the SD ($\sigma_j$) though I'm not at all sure what priors I should use then.

Given that the $\tau_j$ are i.i.d. Gamma with parameters $\alpha, \lambda$ (where $f(x) \propto \lambda^{\alpha} x^{\alpha-1}\exp\{-\lambda x\}$, to define the parameterization of the Gamma), then $\sigma_j = 1/\sqrt{\tau_j}$ has a Stacy distribution, which is a special case of the Amoroso distribution. This has a closed form expression for the mean and standard deviation, assuming the parameters are such that the mean and standard deviation exist, in terms of $\alpha$ and $\lambda$, and hence in terms of your m and d.

One method for generating MCMC samples of the mean and std. deviation of the $\sigma_j$ would be to take your samples of m and d (or, more simply, rG (= $\lambda$) and sG (= $\alpha$)), and transform them as above. However, one suspects that you may indeed have samples where $\alpha \leq 1$ or even $\alpha \leq 1/2$. No doubt many solutions to this exist, but two that come to mind are to 1) throw out all the samples (in their entirety) where this happens, which corresponds to altering your prior on m and d so that they are confined to a region of $\mathbb{R}^{+2}$ where the mean and variance of the $\tau$ exist, or 2) put your prior on $\sigma$ instead of $\tau$, altering the hyperpriors to something appropriate. Without knowing how strongly you're attached to the particular shape of the priors on m and d, though, it's hard to give advice about what "something appropriate" might be. Maybe just put a Gamma distribution on the $\sigma_j$ instead of the $\tau_j$ and continue as you did... hopefully the choice of prior doesn't make much difference to your posterior.

If it doesn't happen all that often, and you like those priors as they are, I'd probably go with option 1. If it happens a lot, though, then those priors in combination with your data are perhaps telling you something about the upper tail of the posterior distribution of the $\sigma_j$.

To summarize why this works, this is equivalent to:

1) Put a Stacy prior on the $\sigma_i$, parameterized by rG and sG,

2) Put hyperpriors on rG and sG as they currently are,

3) Instead of bothering to generate Stacy-distributed $\sigma_i$ and transforming them to $\tau_i$, just generate the $\tau_i$ directly using the relationship between the Stacy prior on $\sigma$ and the equivalent Gamma prior on $\tau$,

4) Calculate samples of the first two moments of the Stacy prior from the sampled rG and sG.

6
Using Bayesian model diagrams to present both model description and results (posteriors)?
8
How to use the SD of a normal sampling distribution to specify the gamma prior for the corresponding precision?
8
What level to use when comparing subjects in a hierarchical Bayesian analysis?
20
What prior distributions could/should be used for the variance in a hierarchical bayesisan model when the mean variance is of interest?
7
What level to use when making inferences on the group mean in a hierarchical Bayesian analysis?
0
What is the proper terminology for the parts of a bayesian hierarchial model?
0
Poisson-Gamma Hierarchical Model