What does the most ideal power curve look like?

Obviously there exists more powerful and less powerful hypothesis tests. I'm not sure whether looking at their power curves is useful for ranking their power. 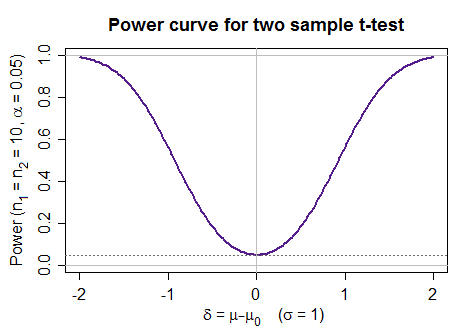 I recognize that image!

High power is better whenever the null is false, so at a fixed significance level, the steeper the curve rises toward 1 (where it would always reject), the better, and the shallower, the worse it is (the more often you fail to reject when you should).

Here's a sequence of power curves for a two tailed symmetric test, like a two-tailed t-test, say. 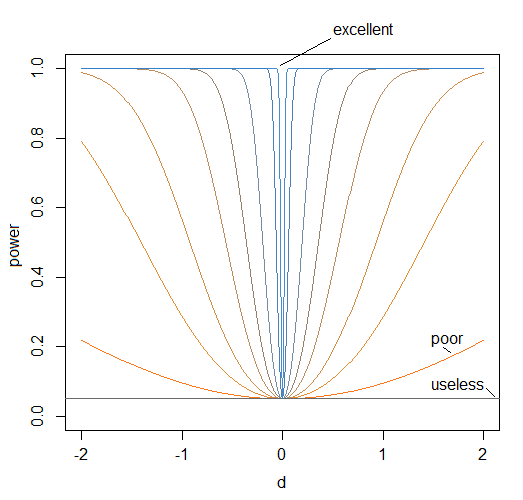 The flatter curves (which are red-orange in the plot, apart from the totally flat one in grey) are relatively poor -- power is comparatively low while the steeper (bluer) ones are relatively good - power jumps up very near 1 as soon as the difference moves a little distance from the null value.

For some situations, there may be a uniformly most powerful test; in particular you might like to read about the Karlin-Rubin theorem. In such a case, for a given set of assumptions and sample size there may be a "best" power curve you can attain under those assumptions across a sequence of alternatives (though you can do better by increasing the sample size).

Even when there isn't a single "best" test, you can compare different tests under some particular sequence of alternatives.

For example, there's plots showing some comparisons of different tests in specific situations (both in question and answer) in this question How to graph Wilcoxon test power R

It is sometimes the case that a power curve dips below the significance level when the alternative is true; in particular this is the case with some omnibus-alternative tests (like goodness of fit tests). Such tests are said to be biased.

Not the answer you're looking for? Browse other questions tagged hypothesis-testing power or ask your own question.

6
Asymptotic power
2
Most powerful test
1
What is the right hypothesis test for this problem?
11
Are there any “esoteric” statistic tests with very low power?
2
What causes low power on hypothesis tests?
1
What statistic(s) should I consider when comparing continuous and binary data?
5
How to interpret bayesian posterior distributions