Rationale for elliptical region of correlations in gene expression data

I am analysing an RNA seq data set and I am trying to look at correlation between expression values of significant genes in 4 different biological duplicates and their clinical parameters.

I tried with different other parameters and I found different shapes, but always with kind of elliptical shape. 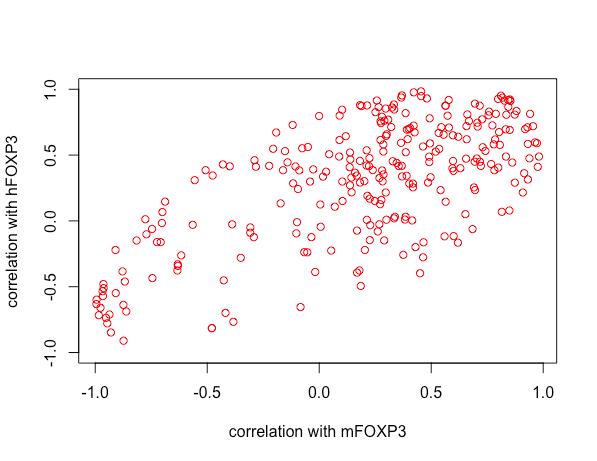 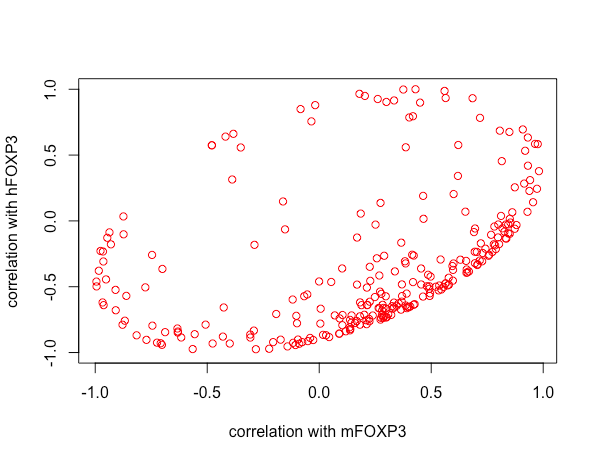 That the points all lie within an ellipse is a mathematical restriction: it does not otherwise reveal anything about your data.

Generally, when you have two random variables (or data vectors) $Y$ and $Z$ with a correlation $\rho$ between them, the correlations between a third variable $X$ and these two are restricted. Writing these correlations as $\rho_1$ and $\rho_2,$ the correlation matrix for $(X,Y,Z)$ is

Because correlations are the covariances between the standardized versions of those variables, and covariances are variances, and variances are the expectations of squared numbers, all correlation matrices must be positive semidefinite. Sylvester's Criterion gives a way to check this property. In this case it says we need to verify that $1-\rho^2 \ge 0$ and that the determinant of the entire matrix is non-negative. The first is obvious and the second, after some easy algebra, comes down to the relation

This is recognizable as the equation of a symmetric ellipse and the inequality specifies the points inside it. Morover, you can check that the points

all satisfy this constraint. Since they intersect the boundary of the square $[-1,1]\times[-1,1],$ we see that this ellipse is inscribed in the square. This ellipse appears in the illustrations at https://stats.stackexchange.com/a/71303/919, which discusses them in much more detail.

Finally, the distribution of the points within the ellipse may be of some interest--but interpreting that distribution is not easy, given how indirectly this information reflects on the relationships among your variables. Any association among correlations (which are functions of second trivariate moments) already reflects some kind of fourth order moments of the data. Finding a visualization a little less remote from the data may be more insightful.

We see similar elliptical regions when we plot multivariate regression coefficients. Sometimes a hypothesis test is simultaneously that $\beta_1 = \beta_2 = 0$ such as giving a stronger test of significance in a linear regression by including linear and quadratic terms: i.e. for the null to be true, BOTH have to be 0.

Considering those two are variations on a theme for one underlying function and thus somewhat common structure, it would be surprising if their association with the expression of any gene was strong in opposite directions.

You see some points where the correlation weakened or was lost, which makes sense - loss-of-function mutations are reasonably common when a receptor stops recepting, sometimes you get change-of-function, but it would be astonishingly unlikely if a change in structure flips the biological effect on its head directly, rather than just by jamming up the gears.

Not the answer you're looking for? Browse other questions tagged correlation scatterplot or ask your own question.

50
What is the intuition behind conditional Gaussian distributions?
36
Why shouldn't the denominator of the covariance estimator be n-2 rather than n-1?

8
Correlating continuous clinical variables and gene expression data
4
Statistics for multi-test replicated correlation analysis
5
Comparing two sets of data for similarity
2
Strong correlations masking weak correlations?
0
Should I log2-transform my data before performing clustering with (1-Pearson Correlation) as distance matrix?
0
Which distance function do you have to use for miRNA expression data?
0
Association between gene expression levels and clinical symptoms?