What is the main difference between multiple R-squared and correlation coefficient?

I have a R code that runs lm function and get the summary. 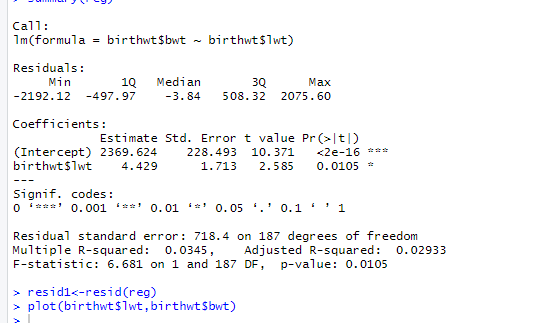 In the case of a simple linear regression model (ie one with a single predictor, say $X$, and a single outcome, say $Y$) such as you have here, multiple R squared can be interpreted as the percentage of variance in $Y$ that can be explained by $X$.

In general, these four quantities are the same giving three different ways to think about R squared.

We can repeat this with the data used in the question which has the special feature that there is only a single predictor:

In the special case of a single predictor we have additional equalities which we can add to the above list:

Thus we have these three additional ways to view R squared (6 in total) in the case of a single predictor.

Multiple R-Squared explains the percentage variation in Y (dependent variable) that can be explained by the Xs (independent variables). If you add more X(s) to the model, the multiple R-squared will increase but that doesn't necessarily mean that the newly added variable(s) is/are contributing to the explanation of Y. The adjusted R-Squared, adjust for the amount of variable(s) you've added to the model. This tells you if the newly added variable(s) is/are actually contributing to explaining Y.

Correlation coefficient tells us how two variables move or interact with each other.