What's the added value of SD line over regression line when examining association between 2 variables?

I'm trying to incorporate different practices to use when exploring a new data set. Especially, how to examine the association between two variables.

Steps for example (not necessarily by order):

I've come across the "SD line" in Freedman's Statistics book, which is defined as:

"the line that goes through the point of averages and climbs at the rate of one vertical SD for each horizontal SD" Freedman, D., Pisani, R., & Purves, R. (2007). Statistics (4th edn).

Since this book ("Statistics") is a canonical textbook, I consider its choice to discuss the SD line as an indication for the line's importance. However, a simple google search for the term "SD line" doesn't yield as many independent results. Most of them come directly from Freedman's book. This tells me it's not a central concept in bivariate analyses in general. 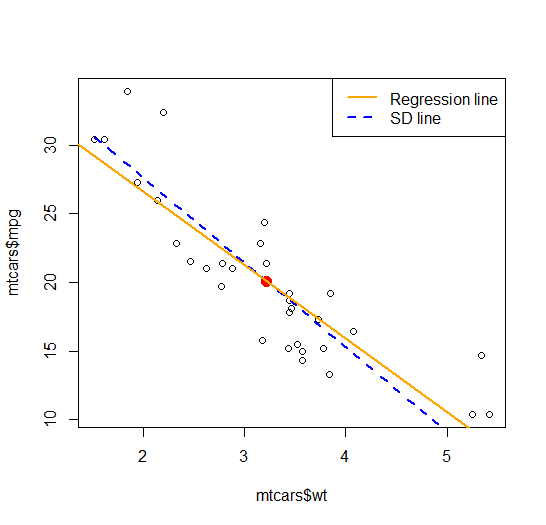 Thus, my question: how can the SD line increase one's understanding about the relationship between two variables, in a way that's either adding or complementing on what the regression line already tells?

The SD line is a didactical and visual aid to help seeing the relation for the slope of the regular regression line.

The SD line shows how x and y are varying and this can give a more or less steep or flat line depending on the ratio $ \frac {\sigma_y}{\sigma_x}$.

The higher $R^2$ the more the model explains the variance in the data, and the closer the regression line will be to the SD line.

Not the answer you're looking for? Browse other questions tagged standard-deviation descriptive-statistics association-measure or ask your own question.