Best method to report the central tendency of various medians weighted by number of patients?

I have approximately 20 median values (overall survival in months) which were obtained from different populations groups (but they shared similar characteristics). Each population group has a unique size (e.g. 52 patients) and a corresponding median overall survival. I do not have individual patient level data.

I would like to obtain a value which best represents a measure of central tendency for patients with this characteristics across all populations. I wanted to know if doing a weighted average of medians would be my best option (each median is weighted by its corresponding number of patients). Additionally, I am wondering if it is possible to calculate a 95% CI and what method would best be used?

The weighted average and weighted median would each be appropriate in some situations, but you'd need assumptions about the distributions to get any confidence interval.

As an example, suppose you want the median survival time among 30 people, where you know:

Here is a table showing different medians for the combined group given normal distributions for the subgroups with different standard deviations:

And here is a graphic from Mathematica showing the distributions and their medians for the four corner cases in the table: 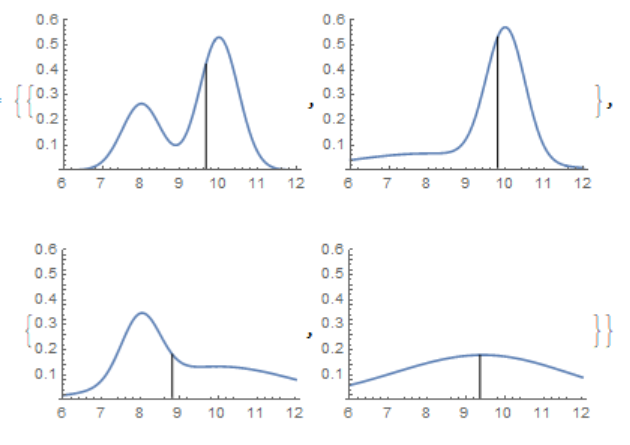 This shows the variety of possibilities.

4
Whether to use mean or median to summarise the central tendency of length of time to perform a task
1
What is the sample-size range for which the median should be preferred to the mean as a measure of central tendency? And why?
0
Best method of estimating the output rate of a group
6
Comparison of medians in samples with unequal variance, size and shape
3
If the mean and median underestimate the true central tendency, why use them?
0
Best measure of central of tendency
0
Finding The Central Tendency From A List Of Averages
2
Is the median of a very large number of medians always equal to the true median
0
What test to use to see whether the number of patients in the two hospitals is the same?