glmnet for binary outcomes: Why is “%Dev” inversely correlated with lambda?

I am new to glmnet but would like to apply it to a dataset with binary outcomes. Can you please clarify a few questions for me? Below are the codes and data setup

(1) In the output below, what is the %Dev” and why is %Dev negatively correlated with $\lambda$?

Specifically, the glmnet vignette said %Dev is the percentage of deviance explained—but on which set? Is it on each holdout set, where %Dev is calculated by running prediction (on the holdout set) with the coefficients generated from training set? 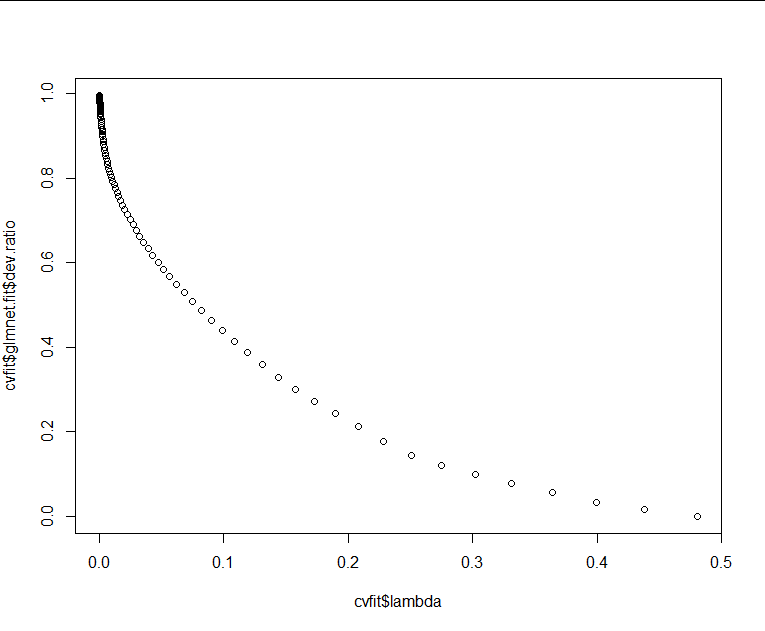 I understand that the optimal lambda is chosen to minimize the (cross-validated) deviance. Is the “binomial deviance” shown below defined as averaging over the deviance at fold 1,2…10 (assuming 10-fold CV), where at each fold the deviance is calculated by predicting on the holdout set, using coefficients obtained from training? 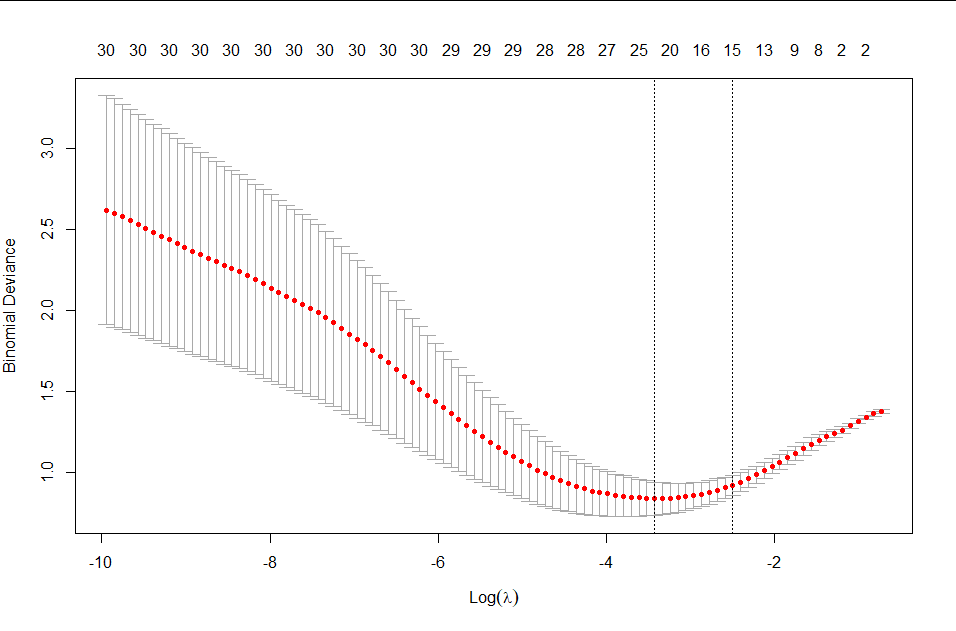 (3) On which set is the null deviance (cvfit$glmnet.fit$nulldev) defined?

It looks like cvfit$glmnet.fit$nulldev is a constant; is it the null deviance defined on the overall sample?

Although this seems to be primarily a question about code in a specific package (off topic on this site), there is enough general statistical content to address briefly.

Most of your general questions about deviance in cross-validation of a binomial/logistic model are answered quite well on this page. There is no fundamental difference from using cross-validation for an ordinary least squares model: what you evaluate is the performance averaged over the hold-out sets. The performance in this case is gauged by the deviance. Open source code makes it fairly easy to get as deep as you want into the implementation. In this case, the trick is to recognize that the object produced by glmnet() for a binomial model is of class "lognet" so that the work is done by the function cv.lognet(). The code for that function will be printed if the package is loaded and you type cv.lognet at the R prompt.

With respect to the specific questions:

Thanks @EdM for the clarification! Now I can appreciate the difference between deviance defined on the full data (question 1) and cross-validated averaged deviance (question 2).

The page you mentioned provides great explanation on how deviance is defined on an glment object, as well as the apparent normalization applied to the cross-validated deviance.

To illustrate the relationship between the two different operational definitions for deviance, I generated the plot: 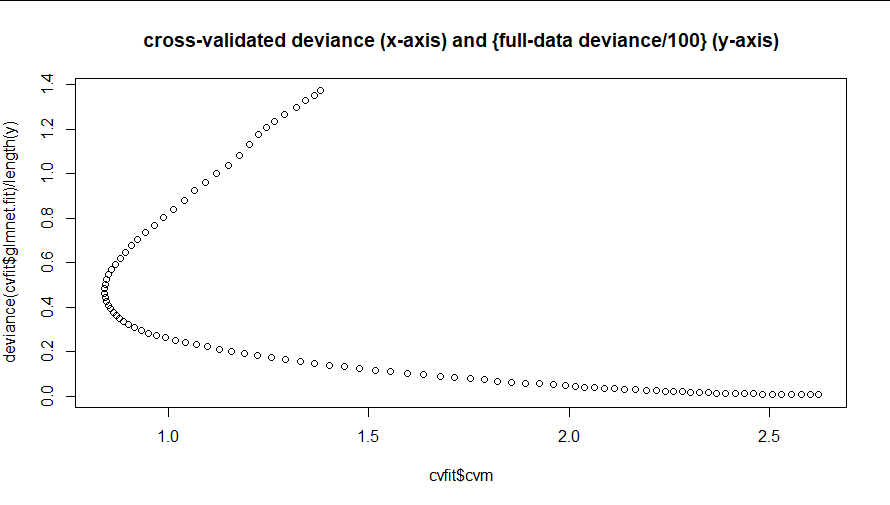 The plot shows that there may be some kind of relationship between the two, which is probably what the "normalization" mentioned in this page was about.

Not the answer you're looking for? Browse other questions tagged logistic cross-validation lasso ridge-regression glmnet or ask your own question.

12
Exact definition of Deviance measure in glmnet package, with crossvalidation?

12
Exact definition of Deviance measure in glmnet package, with crossvalidation?
3
Elastic net regularization: mean square error monotonically increases with lambda
7
Calculating the Log Likelihood of models in glmnet?
5
Performing Cross Validation to Compare Lasso and Other Regression Models in R
0
How to interpret this glmnet() code and its output in R
1
Interpret and compare lasso models
10
How to do cross-validation with cv.glmnet (LASSO regression in R)?
6
How to calculate $R^2$ for LASSO (glmnet)
0
k-fold cross validation: Force at least m instances in each fold