I know that there are lots of materials explaining p-value. However the concept is not easy to grasp firmly without further clarification.

Here is the definition of p-value from Wikipedia:

The p-value is the probability of obtaining a test statistic at least as extreme as the one that was actually observed, assuming that the null hypothesis is true. (http://en.wikipedia.org/wiki/P-value)

The second question is about another definition of p-value from Wolfram MathWorld:

The probability that a variate would assume a value greater than or equal to the observed value strictly by chance. (http://mathworld.wolfram.com/P-Value.html)

I understood that the phrase "strictly by chance" should be interpreted as "assuming a null hypothesis". Is that right?

I posted a new question that is more clarified based on the discussion in this thread.

You have to think at the concept of extreme in terms of probability of the test statistics, not in terms of its value or the value of the random variable being tested. I report the following example from Christensen, R. (2005). Testing Fisher, Neyman, Pearson, and Bayes. The American Statistician, 59(2), 121–126

Here $r$ are the observations, the second line is the probability to observe a given observation under the null hypothesis $\theta=0$, that is used here as test statistics, the third line is the $p$ value. We are here in the framework of Fisherian test: there is one hypothesis ($H_0$, in this case $\theta=0$) under which we want to see whether the data are weird or not. The observations with the smallest probability are 2 and 3 with 0.5% each. If you obtain 2, for example, the probability to observe something as likely or less likely ($r=2$ and $r=3$) is 1%. The observation $r=4$ does not contribute to the $p$ value, although it's further away (if an order relation exists), because it has higher probability to be observed.

This definition works in general, as it accommodates both categorical and multidimensional variables, where an order relation is not defined. In the case of a ingle quantitative variable, where you observe some bias from the most likely result, it might make sense to compute the single tailed $p$ value, and consider only the observations that are on one side of the test statistics distribution.

I disagree entirely with this definition from Mathworld.

I have to say that I'm not completely sure I understood your question, but I'll try to give a few observations that might help you.

In the simplest context of Fisherian testing, where you only have the null hypothesis, this should be the status quo. This is because Fisherian testing works essentially by contradiction. So, in the case of the coin, unless you have reasons to think differently, you would assume it is fair, $H_0: \theta=0.5$. Then you compute the $p$ value for your data under $H_0$ and, if your $p$ value is below a predefined threshold, you reject the hypothesis (proof by contradiction). You never compute the probability of the null hypothesis.

With the Neyman-Pearson tests you specify two alternative hypotheses and, based on their relative likelihood and the dimensionality of the parameter vectors, you favour one or another. This can be seen, for example, in testing the hypothesis of biased vs. unbiased coin. Unbiased means fixing the parameter to $\theta=0.5$ (the dimensionality of this parameter space is zero), while biased can be any value $\theta \neq 0.5$ (dimensionality equal to one). This solves the problem of trying to contradict the hypothesis of bias by contradiction, which would be impossible, as explained by another user. Fisher and NP give similar results when the sample is large, but they are not exactly equivalent. Here below a simple code in R for a biased coin.

(1) A statistic is a number you can calculate from a sample. It's used to put into order all the samples you might have got (under an assumed model, where coins don't land on their edges & what have you). If $t$ is what you calculate from the sample you actually got, & $T$ is the corresponding random variable, then the p-value is given by $\newcommand{\pr}{\mathrm{Pr}} \pr\left(T\geq t\right)$ under the null hypothesis, $H_0$. 'Greater than' vs 'more extreme' is unimportant in principle. For a two-sided test on a Normal mean we could use $\pr(|Z|\geq |z|)$ but it's convenient to use $2\min [\pr(Z\geq z),\pr(Z\leq z)]$ because we have the appropriate tables. (Note the doubling.)

There's no requirement for the test statistic to put the samples in order of their probability under the null hypothesis. There are situations (like Zag's example) where any other way would seem perverse (without more information about what $r$ measures, what kinds of discrepancies with $H_0$ are of most interest, &c.), but often other criteria are used. So you could have a bimodal PDF for the test statistic & still test $H_0$ using the formula above.

Suppose you're testing the fairness of a coin with 10 tosses. There are $2^{10}$ possible results. Here are three of them:

You'll probably agree with me that the first two look a bit suspicious. Yet the probabilities under the null are equal:

To get anywhere you need to consider what types of alternative to the null you want to test. If you're prepared to assume independence of each toss under both null & alternative (& in real situations this often means working very hard to ensure experimental trials are independent), you can use the total count of heads as a test statistic without losing information. (Partitioning the sample space in this way is another important job that statistics do.)

Its distribution under the null is

So for this null, the two statistics order samples the same way. If you repeat with a null of 0.85 (i.e. testing that the long-run frequency of heads is 85%), they don't. 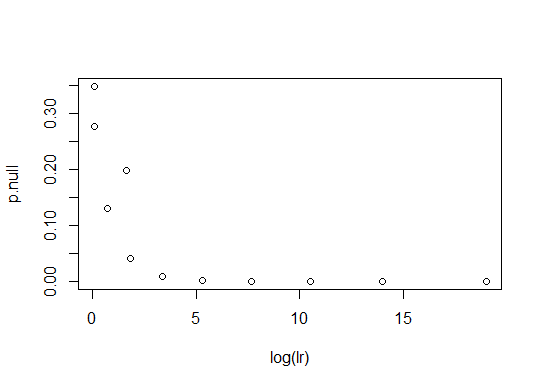 Some values of $t$ are less probable under the alternative, & the likelihood ratio test statistic takes this into account. NB this test statistic will not be extreme for

And that's fine - every sample can be considered extreme from some point of view. You choose the test statistic according to what kind of discrepancy to the null you want to be able to detect.

... Continuing this train of thought, you can define a statistic that partitions the sample space differently to test the same null against the alternative that one coin toss influences the next one. Call the number of runs $r$, so that

while at the other extreme

have $r=1$. Using probability under the null as the test statistic (the way you like) you can say that the p-value of the sample

is therefore $\frac{4}{1024}=\frac{1}{256}$. What's worthy of note, comparing this test to the previous, is that even if you stick strictly to the ordering given by probability under the null, the way in which you define your test statistic to partition the sample space is dependent on consideration of alternatives.

Not the answer you're looking for? Browse other questions tagged hypothesis-testing p-value interpretation or ask your own question.

3
P-Value Clarification
3
What does "more extreme" mean when talking about p-values?
0
What does p-value mean in Multiple Regression Analysis?
40
Why is the null hypothesis often sought to be rejected?
21
Ljung-Box Statistics for ARIMA residuals in R: confusing test results
32
Accommodating entrenched views of p-values
3
Frequentist perspective of regression coefficients and significance (coming from Bayesian background)?
6
Another p-value fallacy
6
p-value with multimodal PDF of a test statistic
1
Is there an error in the one-sided binomial test in R?
See more linked questions