When to Normalization and Standardization?

I see pro-processing with Normalization which aligns data between 0 and 1.

Any clear definition at what cases what should be used ?

In unsupervised learning, the scaling of the features has a great influence on the result. If a feature has a variance that is many times greater, it can dominate the target function of the algorithm. Therefore, it is of great importance to scale the input data in a way that their variability matches or at least does not contradict the semantics. There are several transformation methods to put the features into a comparable form. These use different forms of normalization or standardization according to their context. To clarify the differences, I will briefly explain the terms, what is done and show you some graphics(compare the scales) from ski-kit learn and my own:

Normalization: In normalization a vector is divided by a norm of a vector to set its length to a certain value. Often, rescaling by the minimum and length of the vector is used here so that ALL elements lie between 0 and 1.

In summary, it can be said that standardization gives the features a comparable scaling, but without highlighting outliers. By contrast, normalization gives the features exactly the same scaling. This can be very useful for comparing the variance of different features in one plot (like the boxplot on the right) or in several plots of the same scale. To identify outliers, I recommend the Robust transformation, which leads to the box plot on the right. 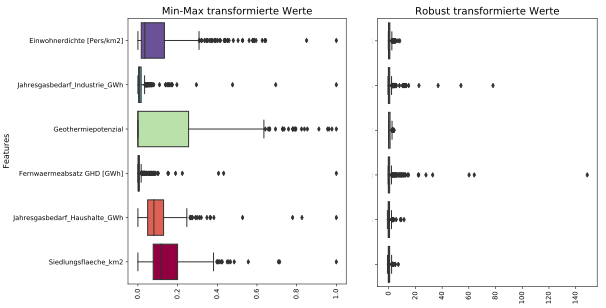 As a result, the mean 50% of the values become very small, but the big outliers are only slightly affected. With an optical limit value procedure, these outliers can therefore be identified very easily.

There are many reasons why we'd want to stardardise the data. The two most common ones are:

Again, many reasons here as well, here are two common ones (You can normalise a value between any two values. For the examples below, I will assume that you normalised values between 0 and 100):

To summarise. Standardisation is something that is necessary for some cases in machine learning, deep learning and it's really insightful to identify outliers. Normalisation is not something necessary but it is very user friendly and it gives you an idea of ranking as you can see where the score lies compared to the rest. The difference is that with normalisation, the scores of 0 and 100 doesn't necessarily mean that these two values are outliers! It's just the lowest and highest scores in your dataset. Similarly for Standarisation, the scores or 3.55 although extremely high and probably an outlier, doesn't mean that it'st the highest value you may have in the dataset. Both transformations are useful for different cases.

Not the answer you're looking for? Browse other questions tagged normalization feature-scaling or ask your own question.