Is this intuitive explanation of joint probability correct?

I'd like to ask if I am understanding correctly the intuition behind two independent events A and B happening simultaneously:

(Note: I use asterisks here to depict multiplication)

Firstly, the sample space, $\Omega$, is the set of all possible outcomes. Thus, the probability of any outcome being in this space must be 1, as $\Omega$ encompasses all possibilities.

The probability of a specific event, A, is then some proportion of this sample space. Or, P(A) is the portion of events in $\Omega$ where A occurs.

I think it might look redundant, but I meant to convey that because the event being in the sample space $\Omega$ must happen, then P(A) can only be some fraction of this event.

Now, since the probability P(A$\cap$B) is being discussed, A and B must occur simultaneously to represent (A$\cap$B). And because both have to occur, we can allow either of these events to be analogous to the sample space $\Omega$ in the previous example.

Consider if B takes the place of the sample space from the previous example. In this sense, what I'm trying to say is that, conceptually, in the space of events where B occurs, P(A$\cap$B) is the portion of this space where A also occurs.

I hope I'm not being confusing with trying to treat either P(B) or P(A) as the sample space, but in the end, what I wanted to communicate with that is that we can assume either event 'happens', then we only need the proportion of it where the other event also occurs, which is how the joint probability formula is arrived at. Of course, in my second example A and B can be conceptually switched.

EDIT: In my previous version of this post, I had confused some terms, so in my edit I have tried to use less technical terms to be more clear with what I mean. Please let me know if I have used terminology incorrectly.

I would say this is pretty much spot on; if you considered how to recover what fraction of $\Omega$ the events in the intersection of some As & Bs represent, you'd have also defined conditioning.

This visual intuition is often used in graphical proofs of the Bayes Theorem. I couldn't find the 2D one that really made it click for me, but here's a visualization for three variables: 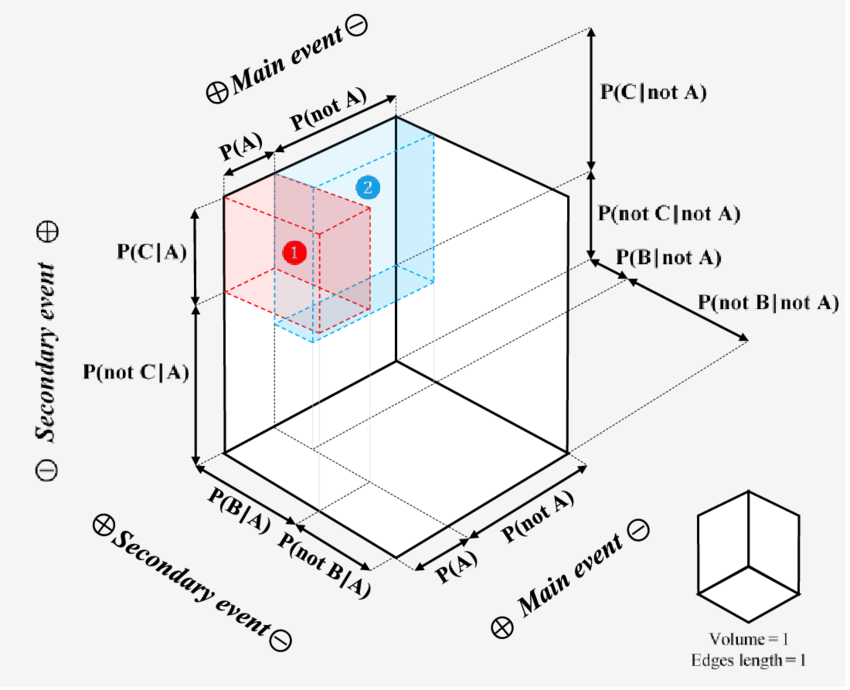