Update on 3/1/2020. All the material below and much more has been incorporated into a comprehensive article on this topic. The question below is discussed in that article, entitled "State-of-the-Art Statistical Science to Tackle Famous Number Theory Conjectures", and available here.

Question: what is the limiting distribution of $Z$, as $m\rightarrow\infty$?

Using simulations, I got a pretty decent approximation. Below is its empirical distribution: 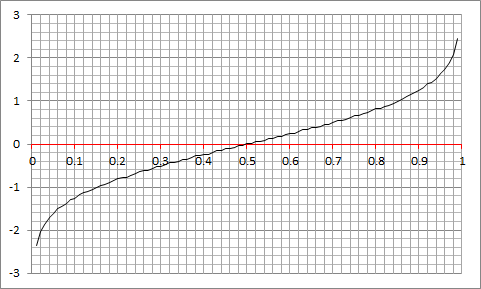 It is perfectly smooth and symmetric at the limit, but the excess kurtosis is $0.63$, so it is not a normal distribution. The empirical percentile distribution of $Z$ is in the table below, maybe there is an almost perfect fit with some known distribution with 0 mean and unit variance.

If instead of one sequence $S$, you consider $n$ random sequences $S_1,\cdots,S_n$ all of same length $m$, and independent from each other, then the variance for the counts $N_{W,S}$, computed across all sequences bundled together, satisfies $$\mbox{Var}(X)\rightarrow\frac{m-k+1}{2^k}\cdot \Big(1-\frac{1}{2^k}\Big) \mbox{ as } n\rightarrow\infty.$$ This result can be used to test if sequences found in actual data sets are both random and independent from each other.

The problem is that the successive $m-k+1$ blocks $W$ of length $k$ do overlap in any sequence $S$ of length $m$, resulting in lack of independence between the various counts $N_{W,S}$. If the blocks (and thus their counts) were independent instead, then the counts would follow a multinomial distribution, with each of the $n\cdot (m-k+1)$ probability parameters being $\frac{1}{2^k}$, and $Z$ would be asymptotically normal. Here this is not the case: the excess kurtosis does not converge to zero. There is convergence to smooth, symmetrical distributions as $n$ and $m$ increase, but that limit is never Gaussian. My big question is: what is it then?

That said, for the first two moments (expectation and variance) attached to $N_{W,S}$, we get the same values (at least asymptotically) as those arising from the multinomial model. But not anymore for higher moments.

The following code performs simulations and computes the variances, expectations, kurtosis and all the counts $N_{W,S}$. Note that the variance and kurtosis depend on $S$, but they stabilize as $n$ is increasing. The expectation depends only on $m$ and $k$.

Correspondence to a waiting time problem

Imagine assembling the text or book untill you reach some fixed number, $x$, of words. Then consider the length of the text, $m$, as the variable.

We can relate the two situations by:

In this alternative way we can consider the problem as a waiting time problem. We describe the distribution of text size $M$ for a given number of words $m$ as a sum of waiting times for the individual words. This is analogous to many other distributions:

and we can convert this into

where $\theta_1$ and $\theta_2$ are respectively the mean and standard deviation of the waiting time for a single event.

Computational model and relation with diffusion/chromatography

(Possibly there might be some non continuous function to model this more exactly, e.g. the negative binomial for the words 10 and 01. However the Gamma distribution does it pretty well)

This diffusion process resembles somewhat a chromatography process (this is what I first thought about when trying to tackle this problem), possibly there might be more detailed descriptions in the literature relating to chromatography.

For the case where we look for the number of times the word 11 appears in a text of size $k$ we describe two variables:

Then we can describe the evolution iteratively

We can model this computationally. In addition, the arrival time seems to be modeled as an Erlang/Gamma distribution as well. 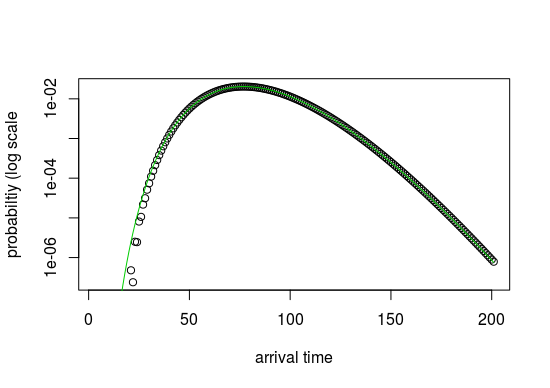 We can relate this with the waiting time to make an additional step (given that the last character is 1, what is the distribution of the number of characters that we need to add before a new word arises)

For the word 11 we can compute this with reasonable accuracy:

Regarding your experimental distribution 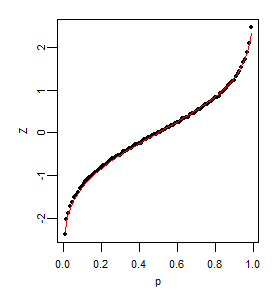 I wonder whether the observed excess Kurtosis is something peculiar (From the image I actually notice a negative excess Kurtosis, but the same is true for the variance. The points are a bit closer to 0 than the red curve which are values for a normal distribution. So maybe the points in the tails, which are not in these 99 points, are important here.).

There is convergence to smooth, symmetrical distributions as $n$ and $m$ increase, but that limit is never Gaussian.

Not the answer you're looking for? Browse other questions tagged probability hypothesis-testing distributions asymptotics combinatorics or ask your own question.

39
A fair die is rolled 1,000 times. What is the probability of rolling the same number 5 times in a row?
9
What are the chances rolling 6, 6-sided dice that there will be a 6?
14
Checking if a coin is fair based on how often a subsequence occurs
8
Number of events in a segment if waiting times are drawn from a mixture of two exponential distributions
3
Does exponential waiting time for an event imply that the event is Poisson-process?
1
How to get this analytical results for probability of wait times

23
Cauchy Distribution and Central Limit Theorem
1
Variation on the urn problem and frequency distribution
4
Why is the concept of the Null hypothesis associated with the student's t distribution?
1
Statistical test for non uniform counts
0
Central limit theorem for non-identical distributed random variables
3
Hypergeometric distribution- problem with derivation
0
Why can't this (unordered with repetition) combinatoric problem be solved with this other approach?