(Note: The title is confusing, as I have no idea if a name / short description exists for the setting below. I'm open to pointers and/or suggestions.)

The question in its general form reads:

Other questions that are perhaps too tiny and coupled to warrant their own CrossValidated question:

Some intuitive cases why the above is wrong: $Y_{(N)}$ and $Z_{(N)}$ are not always, but still quite likely to generated by the same $X_i$: If $Y_i$ is the largest amongst its set, chances are that the corresponding $X_i$ is quite large as well, and thus the corresponding $Z_i$ stands a higher-than-random chance to become the largest amongst its set.

On the other hand, one will have a hard time convincing others that $Y_{(1)}$ and $Z_{(N)}$ are generated by the same $X_i$ --- you will need $X_i$ to be somewhere in the middle, $\epsilon_{Yi}$ to be very negative, and $\epsilon_{Zi}$ to be very positive for that to happen. The latter two rarely happen together.

I've also run some simulation to get a feel of how the probabilities behave. This require reformulating the main problem a bit as:

We can get the answer to the original question above by picking out the probability corresponding to a particular $s$.

The following is a Python snippet that generates an empirical probability mass function for the reformulated problem. I've taken one off the ranks to enable the comparison with beta binomial distributions (see below).

The following two figures shows the empirical PMF for $r=1$ and $r=50$ respectively. To me, they look quite like the beta binomial distributions, which might make sense as we are dealing with order statistics. I am able to fit the parameters for the distribution with reasonable accuracy, but I am more interested in how the parameters come about. 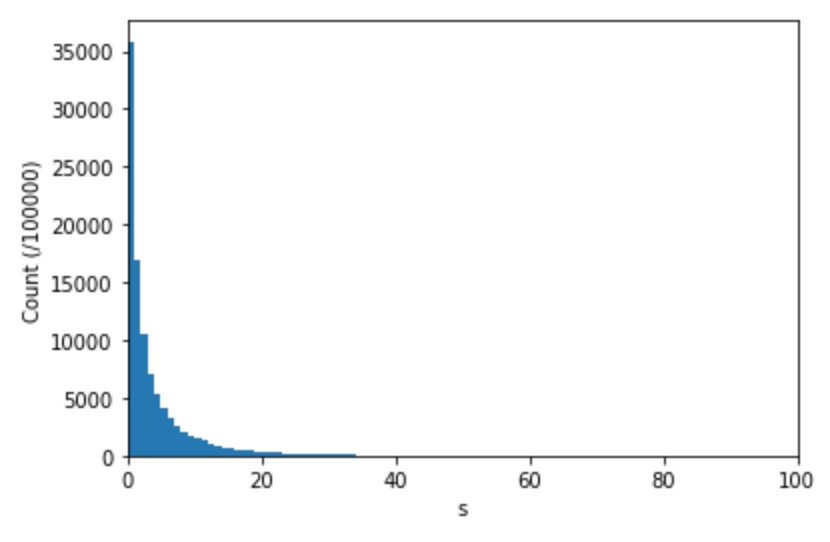 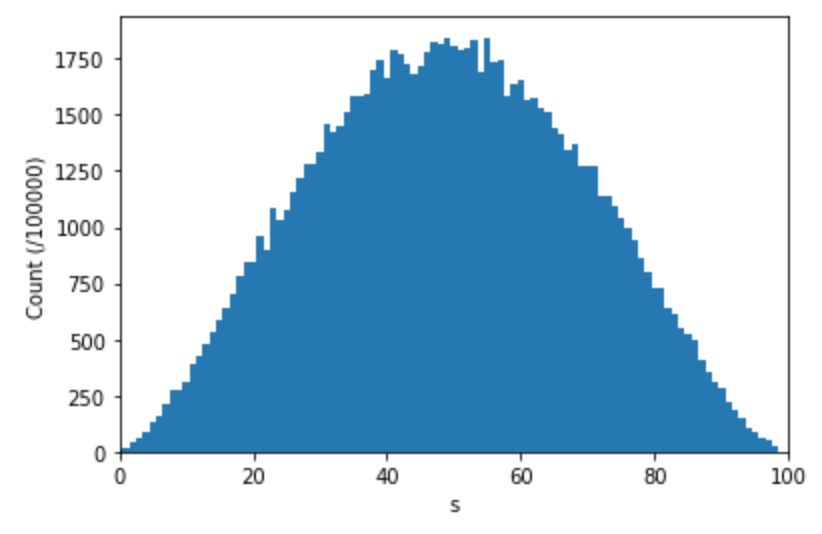 As Matt pointed out in the comments - it is indeed a hard problem. The answer below is a more credible attempt that (in my opinion) better approximates the quantity.

A general prior for the distribution

can be formalised as the probability that exactly $s-1$ other (assumed independent) $Z_k$ are less than $Z_i$, which makes $Z_i$ the $s^\textrm{th}$ ranked item:

Let's call the sum of the indicator variables $C$ (for count).

To get the probability mass function of $C$, we first recognise that $Z_i$ is a continuous random variable with probability density $f_{Z_i}(z)$. Also for any realisation $z$, the probability that an independent $Z_k$ is less than $z$ is simply ${p = F_{Z_k}(z)}$, where $F_{Z_k}$ is the cumulative density function of $Z_k$.

Simplifying the prior to something we can work with

Now the problem here is that the prior above is likely to be intractable, even under the normal assumptions as specified in the original question. This is because $Z_k$ is normal, but $Z_i$ is almost certainly not as it carries ranking information from $Y_{(r)}$.

In order to have something that we can actually work with, we approximate the prior using beta distributions. Beta distributions are a natural choice to me as they are closely related to order statistics, and moreover is a conjugate prior to binomial likelihood, which eases the computation of the probability masses for $C$. The plots in the question seems to support such hypothesis as well.

9
Distribution of 'unmixed' parts based on order of the mix
28
Gaussian Ratio Distribution: Derivatives wrt underlying $\mu$'s and $\sigma^2$s
3
Variance of Gaussian linear combination
0
X is greater than Y, Z…X_n when all normal distributions
7
Does having the same order statistics imply the same distribution?
8
Variance of Normal Order Statistics
2
The probability that the minimum of a multivariate Gaussian exceeds zero
2
EM Algorithm For Bipolar Normal Distribution