I am writing a paper on the evolution of altruism. To do so, I have written a computer program that simulates the environment and allows a population to evolve. Organisms are either altruists or are not altruists. Altruists will try to save organisms that starve on any generation, but their probability of reproduction is decreased by a parameter p.

My test was to conduct the simulation in ten trials with different values of p. For each trial, 5 simulations were run, each lasting 30 generations. Throughout, I tracked the proportion of altruists in the population.

The data tables are massive, but I constructed a summary by averaging the altruist frequency across each of the five exposures, which is shown here: 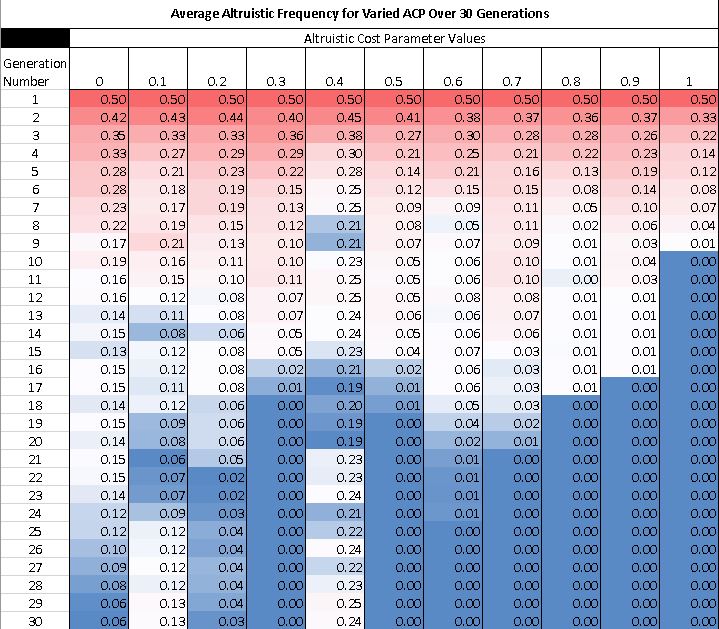 I've been told that I should conduct an ANOVA to compare each of the series. I want to test the null hypothesis of the altruistic parameter having no effect on the evolution of the population. How do I do that? It was suggested that I take the slopes of each value of p and then do the ANOVA, but I'm entirely unsure how to do so or what the requirements are?

Browse other questions tagged statistical-significance anova evolutionary-algorithms or ask your own question.

1
Statistical Significance Test With Evolving Group Sizes
2
Measuring solution quality and allele impact on population fitness for a genetic algorithm
2
statistical test for two populations of proportions
0
Statistical analysis: repeated measures ANOVA
1
Which statistical test would be most appropriate for this data?