What is the proper ARIMA model for the data?

I'm doing a project about inflation forecasting. I do the seasonal differencing of the log of CPI (log(cpi)-log(cpi(-)). After that series still exhibit the nonstationary nature, so I need to difference the log-differenced series again. After that, I obtain the following correlogram: 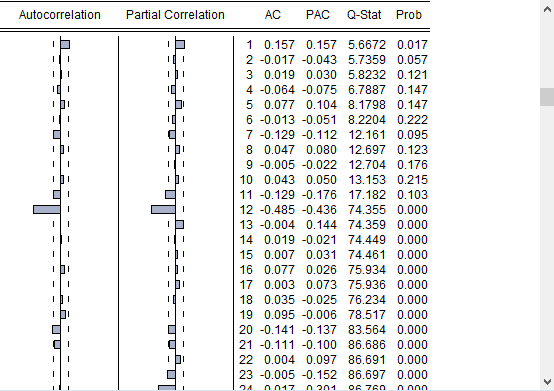 As much as I know, for ARMA both ACF and PACF should decay, but in this case both just "cut off". I'm interested, what process should I classify this? Is it ARMA(1;1)? Also, is it appropriate to include the 12th lag in the ARMA model?

First, you should consider the sample period and subset the data if necessary to make sure there are no obvious structural breaks. Inflation (of any advanced economy) is mainly determined by monetary policy stance of central bank (Federal Reserve, in the case of US). Shift in monetary policy regime during sample period means structural breaks in your data. For example, the US inflation series would be statistically different pre- and post-1980's. Early 1980's is when the Federal Reserve switched from no inflation targeting to having a target (2%). Same for other major central banks. Sample mean in your data should verify this.

Second, as you already observed in your data, given that central banks target a given inflation rate, an inflation series should be stationary with a long-run mean centered at the target rate. In most case it is also highly persistent due to economic reasons. Therefore, inflation series are typically differenced again before applying Box-Jenkins foreasting techniques. In other words, forecasting is usually done for inflation growth, rather than inflation.

For univariate foreast, you should expect a parsimonious ARMA model. If you have quarterly data, $AR(p)$ with $p \leq 4$ is a good place to start. The AR coefficients should alternating signs, as the policy maker attempts to stabilize inflation.

Assuming you have quarterly or monthly data, the ACF coefficient at lag 12 should be treated as a false positive. If the policy maker who determines inflation does not consider lag 12 as part of her policy decision, neither should you.

To cover all your bases, complement with a standard time series model selection exercise (various information criterion/residual whiteness/etc). Beware that the model selected by such procedure need not be the most appropriate, for the reasons given above. For example, a pure MA model would not be reasonable.

First, I would suppose that (in most cases) first differencing the log of a price time series will be sufficient to reach (approximate) stationarity. However, a bit of experimenting will also show you whether a first or second difference model is more useful in terms of forecasting.

Second, to assess the best model for forecasting purposes, I suggest that you fit a variety of different models and compare them using some model selection criterion. For instance, in this paper they use three different model criteria to choose an appropriate ARIMA structure to forecast inflation in Ireland.

Another approach is to fit different models and compare their out-of-sample forecasting abilities (for instance by comparing RMSEs). If you are only interested in forecasting, the model with the best forecasting ability will be your model of choice.

However, I want to add that I'm pretty confident that both approaches will roughly point into the direction of the same model.

It is recommended as well that you run a Box Ljung test and see if there is any remaining serial correlation from you chosen model. If there is you still need to do more work to get the right model.

Not the answer you're looking for? Browse other questions tagged time-series arima model-selection box-jenkins or ask your own question.