Why both data have same standard deviation? 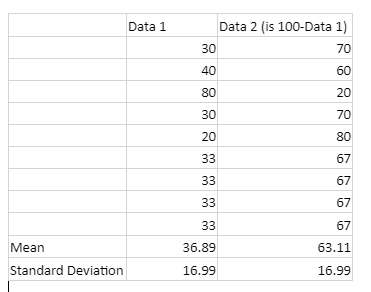 But I am curious why the standard deviation for both data is same. I think because data 2 is "100 - data 1".

I still would like you to try to prove it, but I’ll give some intuition about those two identities I gave.

Remember that variance (and standard deviation) have something to do with how spread out your data are.

$var(X+a)=var(X)$ means that if you take data with some amount of spread and slide them up or down the number line, you do not change the spread.

$var(X)=var(-X)$ is not quite what I gave, but it’ll be part of your proof. The intuition here is that you’re just spinning it around, taking a mirror image. The data are as spread out as their reflection.

Together, $var(100-X)=var(X)$ means that you flip the data to the mirror image and then slide along the number line, but you do not change the spread.

I believe the answer to this question can be expressed in more elemental terms. Beginning with the formula for the sample standard deviation

I want to draw your attention to the expression $(x_i - \overline{x})$ in the numerator. Ignore the summation notation for the purposes of this answer. Note, we decrement the sample mean (i.e., $\overline{x}$) from each realization of $x_{i}$. If we were to increase or decrease each $x_{i}$ by the same amount, the mean will change. However, the distance of each realization of $x_{i}$ from that central tendency remains the same. In other words, each deviation from the mean is the same.

which is the deviation from the sample mean. Now, assume we don't move along the number line just yet and we simply put a negative sign in front of each $x_{i}$, such that we have $-(x_{i})$; this flips the sign of the mean as well. The first realization, $x_{1}$, is now $-20$. Again, substituting $-20$ into the expression,

which is the same number of units away from the mean. Note, squared deviations result in a positive number, so the numerator remains the same. You can run this code in R which builds upon @knrumsey's insightful response, but breaks it down further: 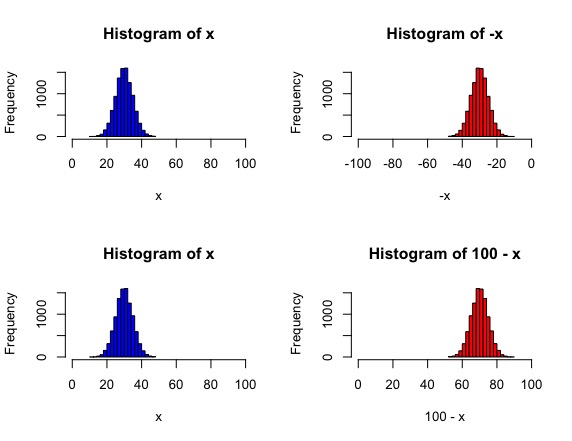 The first row of plots shows how the realizations translate when we negate each $x_{i}$. The second row shows what happens when each $x_{i}$ is subtracted from 100; the translation first flips then slides across the number line. The spread of the distribution is unaffected by this.

To supplement @Dave's answer, take a look at the following histograms which have the same x-axis. Data2 is just a shifted version of Data1 and therefore the standard deviation, which is a measure of spread, shouldn't change.

CONTINUING STEPS TO UNCOVER THE BASIC RELATIONSHIP OF DATA1 AND DATA2:

AND for DATA2 here

...note that not only are the standard deviations the same but the ACF's are the same.

Not the answer you're looking for? Browse other questions tagged mean standard-deviation or ask your own question.