I need some helps to interpret results of a hierarchical regression that included an interaction in the last stage.

2.The variable G changed negative (stage 2) to positive (stage 3), while the interaction effect is negative. Still, relation between G and DV. is positive over all? 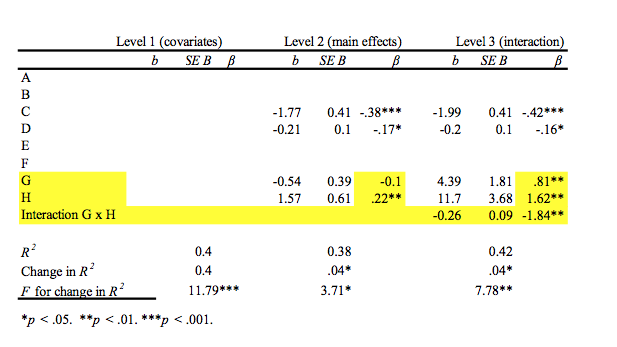 Welcome to the site, StudentY. The key thing to remember with interactions is that in a model with two interacting variables, the "main effects" coefficients for those variables are their coefficient at the 0 value of the other variable.

It is easiest to understand these by graphing them. If you are using R, this can be done with the ggeffects package:

By the way, when you report results from mixed models, you should report the variance estimates in addition to the coefficients.

Not the answer you're looking for? Browse other questions tagged interaction multilevel-analysis hierarchical-clustering or ask your own question.