I am using the Jfox function in spatstat to explore the distance of points in a point pattern to the nearest polygon between a set of points and a set of polygons in an area.

where points is the point pattern object, while win is the owin that represent the polygons from which I want to calculate the distance from my points.

When I run the code I, so far, always get a warning saying

I tried to understand what it means by looking into the code of the resolve.foxall.window function (available here https://rdrr.io/cran/spatstat/src/R/GJfox.R) and plotting the frame of Y, along with the points and the points' window.

I obtained this plot: 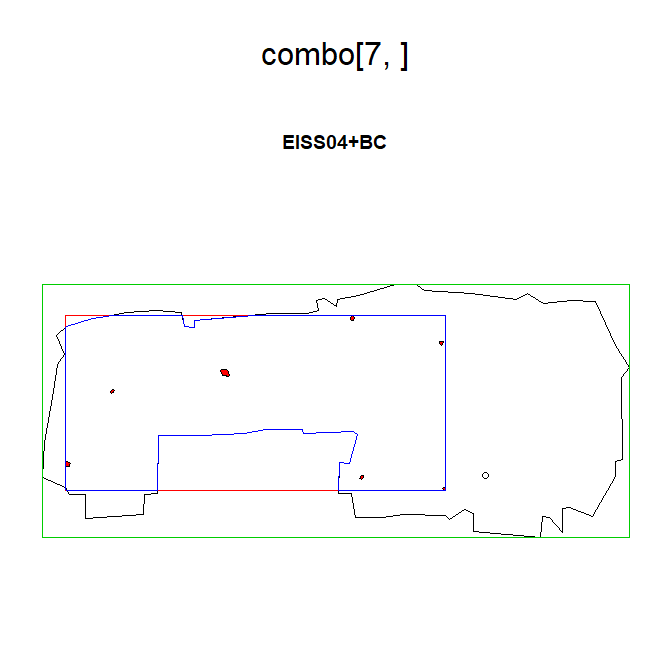 Thanks for a well described problem. The code for Jfox (together with most of spatstat) was written by Adrian Baddeley, and I just passed your question to him. The reply was:

In order to estimate Jfox, the objects X and Y must each have a "window" inside which they are observed. The principle is that we must determine which parts of the 'observation window' did or did not contain the features X and Y.

If Y is a point pattern (class ppp) or line segment pattern (class psp), then the object's data structure includes the 'window' in which the points or lines were observed. So in this case, the calculations are performed using the 'observation window' defined as intersect.owin(Window(X), Window(Y)).

For convenience, the code for Jfox also allows Y to be a window (class owin) representing a spatial feature. The problem arises because spatstat does not have a data type for 'window observed within a window'. So by default, the observation window is taken to be Frame(Y), which is probably not what you intended.

Can you specify the study region for your polygons, i.e. the region of space W which was surveyed in order to determine the presence and location of your polygons? If so, then I recommend you convert your window Y to a logical-valued image as follows:
Z <- as.im(FALSE, W)
Z[Y] <- TRUE
Then use Z instead of Y, i.e. calculate Jfox(X, Z).

Not the answer you're looking for? Browse other questions tagged spatial k-nearest-neighbour point-process or ask your own question.

2
p-value for complete spatial randomness tests
0
Generating pattern of points from a pairwise interaction space point process
5
Point Pattern Analysis: Assumptions for Hopkins-Skellam Index
2
Ripley K function value in a specific radius and dataset using R's Kest function
0
How to simulate spatial point patterns that have spatial structure similar to that of given spatial point pattern?
0
spatstat::plot.envelope observed line longer than shading
0
Can I calculate the integral of the O ring statistic from Ripley's K function?