I have a response variable that is unbounded and continuous, but has heavier tails and violates some of the assumptions of normality (see plots below). 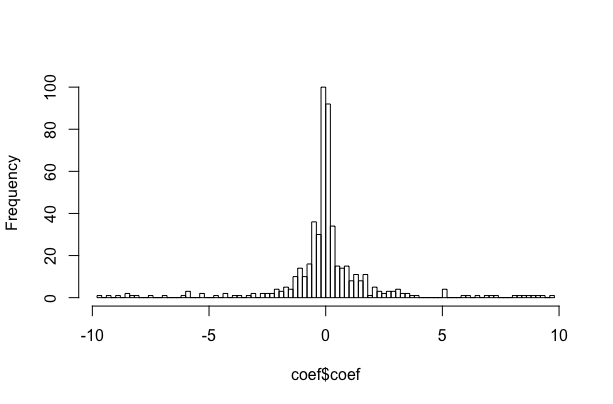 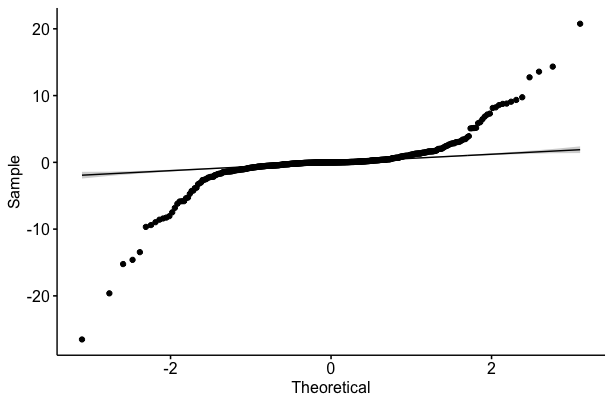 This variable represents selection coefficients for individual animals (estimated in a separate analysis) and I'm hoping to test whether certain aspects of where they live affect how they select habitat (i.e., whether an animal that lives closer to a road selects habitat relative to roads differently than an animal further from a road). So I am hoping to use this variable as the dependent variable in a regression model, with a mixture of continuous and categorical predictor variables. Specifically, I'm hoping to use an information-theoretic approach to choose the best variables that predict selection behavior (the selection coefficients) and then plot predicted coefficients over the range of habitat variables. So I would plot estimated coefficients against distance to road to see if selection changes depending on how close an animal is to a road. However, I am unsure about the best way to formulate that model.

If I were to fit a simple linear regression, what sort of bias would I be introducing? Would this approach give reasonable predictions for most of the range of values (excluding the tails)?

Or does this suggest that there is some non-linearity in the data that should be dealt with in a different way?

Or is it possible and/or better to fit a regression model where the response is defined by a different distribution, such as the logistic distribution? In trying to find an answer to how to do this in R, I have only been able to find information on logistic regression, which, as far as I can tell, does not accommodate a continuous dependent variable (that isn't normally distributed) and so does not address my problem.

Any advice is much appreciated!

The first thing to note is that the estimators in the linear regression model are not particularly sensitive to heavy tails in the error distribution (so long as the error variance is finite). Fitting a standard linear regression to data with excessively heavy tail will mean that data points in the tails are penalised excessively, but the coefficient estimators in the model are still usually quite reasonable. The main drawback in this situation is that prediction intervals for values will be too short, since they do not account for the heavy tails.

It depends on how heavy the tails are. For example, for OLS regression of Student's t residuals, as the degrees of freedom decrease, first the SD, then the mean itself become incalculable. The following linked answer shows simulations demonstrating this effect. For lower degrees of freedom other methods become increasingly relevant.

For example, because the tails look Cauchy or Cauchy similar. I would consider whether one can use a non-parametric regression like Theil regression, even thorough it is slightly biased, or Passing-Bablok, which is unbiased but where it is generally not realized that the latter can only be applied iff the slope is positive. Also, please note that in common with Deming regression these methods do not yield least error in $y$, but rather represent best functional agreement, that is, how the variables 'best' covary.

Also see the robust regression and other related "robust regression" questions (with quotes, about 360 of them) scattered on CV. Such methods can be extended to multi-linear cases and probably non-linear models with somewhat greater difficulty.

Not the answer you're looking for? Browse other questions tagged regression distributions heavy-tailed or ask your own question.