If not, what is the underlying distribution of sample medians?

If you work in terms of indicator variables (i.e. $Z_i = 1$ if $X_i \leq x$ and $0$ otherwise), you can directly apply the Central limit theorem to a mean of $Z$'s, and by using the Delta method, turn that into an asymptotic normal distribution for $F_X^{-1}(\bar{Z})$, which in turn means that you get asymptotic normality for fixed quantiles of $X$.

So not just the median, but quartiles, 90th percentiles, ... etc.

Loosely, if we're talking about the $q$th sample quantile in sufficiently large samples, we get that it will approximately have a normal distribution with mean the $q$th population quantile $x_q$ and variance $q(1-q)/(nf_X(x_q)^2)$.

You need all the conditions along the way to hold, of course, so it doesn't work in all situations, but for continuous distributions where the density at the population quantile is positive and differentiable, etc, ...

Further, it doesn't hold for extreme quantiles, because the CLT doesn't kick in there (the average of Z's won't be asymptotically normal). You need different theory for extreme values.

Edit: whuber's critique is correct; this would work if $x$ were a population median rather than a sample median. The argument needs to be modified to actually work properly.

(The same analysis works for the sampling distribution of any quantile, not just the median.)

I will make no attempt to be rigorous in this exposition, but I do carry out it out in steps that are readily justified in a rigorous manner if you have a mind to do that.

These are snapshots of a box containing 70 atoms of a hot atomic gas:

In each image I have found a location, shown as a red vertical line, that splits the atoms into two equal groups between the left (drawn as black dots) and right (white dots). This a median of the positions: 35 of the atoms lie to its left and 35 to its right. The medians change because the atoms are moving randomly around the box.

We are interested in the distribution of this middle position. Such a question is answered by reversing my procedure: let's first draw a vertical line somewhere, say at location $x$. What is the chance that half the atoms will be to the left of $x$ and half to its right? The atoms at the left individually had chances of $x$ to be at the left. The atoms at the right individually had chances of $1-x$ to be at the right. Assuming their positions are statistically independent, the chances multiply, giving $x^{35}(1-x)^{35}$ for the chance of this particular configuration. An equivalent configuration could be attained for a different split of the $70$ atoms into two $35$-element pieces. Adding these numbers for all possible such splits gives a chance of

where $n$ is the total number of atoms and $C$ is proportional to the number of splits of $n$ atoms into two equal subgroups.

This formula identifies the distribution of the median as a Beta$(n/2+1, n/2+1)$ distribution.

Now consider a box with a more complicated shape:

Once again the medians vary. Because the box is low near the center, there isn't much of its volume there: a small change in the volume occupied by the left half of the atoms (the black ones once again)--or, we might as well admit, the area to the left as shown in these figures--corresponds to a relatively large change in the horizontal position of the median. In fact, because the area subtended by a small horizontal section of the box is proportional to the height there, the changes in the medians are divided by the box's height. This causes the median to be more variable for this box than for the square box, because this one is so much lower in the middle.

In short, when we measure the position of the median in terms of area (to the left and right), the original analysis (for a square box) stands unchanged. The shape of the box only complicates the distribution if we insist on measuring the median in terms of its horizontal position. When we do so, the relationship between the area and position representation is inversely proportional to the height of the box.

There is more to learn from these pictures. It is clear that when few atoms are in (either) box, there is a greater chance that half of them could accidentally wind up clustered far to either side. As the number of atoms grows, the potential for such an extreme imbalance decreases. To track this, I took "movies"--a long series of 5000 frames--for the curved box filled with $3$, then with $15$, then $75$, and finally with $375$ atoms, and noted the medians. Here are histograms of the median positions:

Clearly, for a sufficiently large number of atoms, the distribution of their median position begins to look bell-shaped and grows narrower: that looks like a Central Limit Theorem result, doesn't it?

The "box," of course, depicts the probability density of some distribution: its top is the graph of the density function (PDF). Thus areas represent probabilities. Placing $n$ points randomly and independently within a box and observing their horizontal positions is one way to draw a sample from the distribution. (This is the idea behind rejection sampling.)

The next figure connects these ideas. 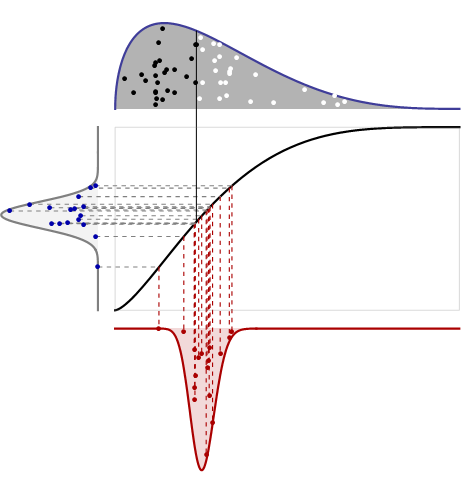 This looks complicated, but it's really quite simple. There are four related plots here:

When $n$ is very large and $F$ does not have a jump at its median, the sample median must vary closely around the true median $\mu$ of the distribution. Also assuming the PDF $f$ is continuous near $\mu$, $f(x)$ in the preceding formula will not change much from its value at $\mu,$ given by $f(\mu).$ Moreover, $F$ will not change much from its value there either: to first order,

Thus, with an ever-improving approximation as $n$ grows large,

This analysis can be viewed as an application of the Delta Method.

(The constants $C$ and $C'$ merely normalize the total area to unity.) Through third order in $x,$ then, this is the same as the log of the Normal PDF with variance $1/(4n).$ (This argument is made rigorous by using characteristic or cumulant generating functions instead of the log of the PDF.)

Putting this altogether, we conclude that

@EngrStudent illuminating answer tells us that we should expect different results when the distribution is continuous, and when it is discrete (the "red" graphs, where the asymptotic distribution of the sample median fails spectacularly to look like normal, correspond to the distributions Binomial(3), Geometric(11), Hypergeometric(12), Negative Binomial(14), Poisson(18), Discrete Uniform(22).

And indeed this is the case. When the distribution is discrete, things get complicated. I will provide the proof for the Absolutely Continuous Case, essentially doing no more than detailing the answer already given by @Glen_b, and then I will discuss a bit what happens when the distribution is discrete, providing also a recent reference for anyone interested in diving in.

Note that $Y_n(x) = \hat F_n(x)$ i.e. non else than the empirical distribution function. By applying the "Delta Method" we have that for a continuous and differentiable function $g(t)$ with non-zero derivative $g'(t)$ at the point of interest, we obtain

The right-hand side of the inequality converges to $1/2$ and the smallest $x$ for which eventually $F_X \geq 1/2$, is the sample median.

DISCRETE DISTRIBUTIONS
When the distribution is discrete (or when the sample contains ties) it has been argued that the "classical" definition of sample quantiles, and hence of the median also, may be misleading in the first place, as the theoretical concept to be used in order to measure what one attempts to measure by quantiles.
In any case it has been simulated that under this classical definition (the one we all know), the asymptotic distribution of the sample median is non-normal and a discrete distribution.

An alternative definition of sample quantiles is by using the concept of the "mid-distribution" function, which is defined as $$F_{mid}(x) = P(X\le x) - \frac 12P(X=x)$$

The definition of sample quantiles through the concept of mid-distribution function can be seen as a generalization that can cover as special cases the continuous distributions, but also, the not-so-continuous ones too.

For the case of discrete distributions, among other results, it has been found that the sample median as defined through this concept has an asymptotically normal distribution with an ...elaborate looking variance.

Most of these are recent results. The reference is Ma, Y., Genton, M. G., & Parzen, E. (2011). Asymptotic properties of sample quantiles of discrete distributions. Annals of the Institute of Statistical Mathematics, 63(2), 227-243., where one can find a discussion and links to the older relevant literature.

I like the analytic answer given by Glen_b. It is a good answer.

Here are areas of elasticity in an answer to the question:

For a standard normal I used the following MatLab code:

and I got the following plot as an output: 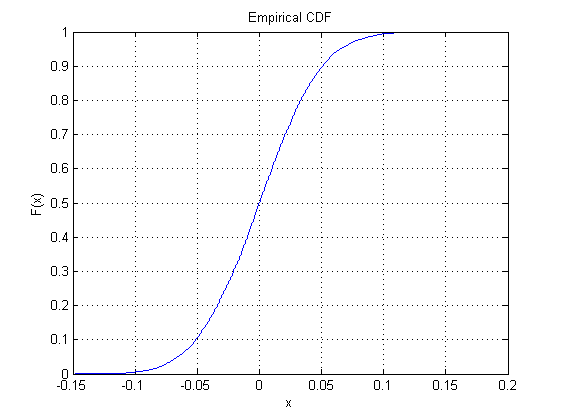 So why not do this for the other 22 or so "built-in" distributions, except using prob-plots (where straight line means very normal-like)?

And here is the source code for it:

When I see the analytic proof I might think "in theory they all might fit" but when I try it out then I can temper that with "there are a number of ways this doesn't work so well, often involving discrete or highly constrained values" and this might make me want to be more careful about applying the theory to anything that costs money.

Yes it is, and not just for the median, but for any sample quantile. Copying from this paper, written by T.S. Ferguson, a professor at UCLA (his page is here), which interestingly deals with the joint distribution of sample mean and sample quantiles, we have:

Not the answer you're looking for? Browse other questions tagged normal-distribution mathematical-statistics sampling median central-limit-theorem or ask your own question.

5
The Central Limit Theorem in Quantile Estimation
4
Is there a statement for the median like the central limit theorem for the mean?
1
Showing p-th sample quantile is asymptotically normal
1
How to find approximation of variance of $i^{th}$ order statistic
0
Median for Normal Distribution
17
Confidence intervals for median
9
Confidence interval for the median
16
What distribution does the inverse normal CDF of a beta random variable follow?
9
Beta as distribution of proportions (or as continuous Binomial)
8
Distribution of half-life from radioactive decay
See more linked questions