I am currently having problems with a Bayesian model selection where the rate of misclassification seems to depend on the actual model parameter. I can create a simple minimal example of this effect, and I can understand why this happens, but I am not sure how to rectify this problem. Here is a minimal example:

Assuming flat priors on the parameters and equal prior likelihood for both models, I can derive the Bayes factor as

However, when I simulate this only with the model where $v_1=1-v_2$, I find that the rate of misclassification depends strongly on the actual probability I use in the simulation: 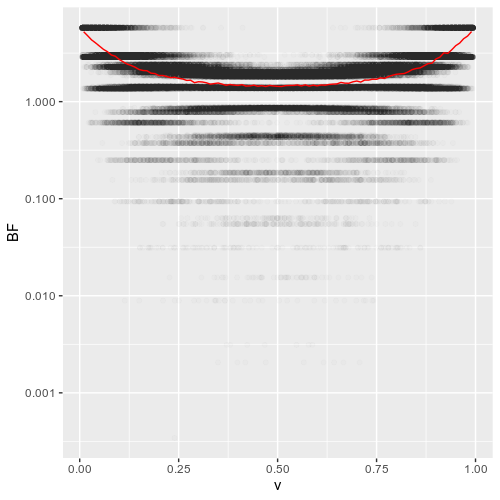 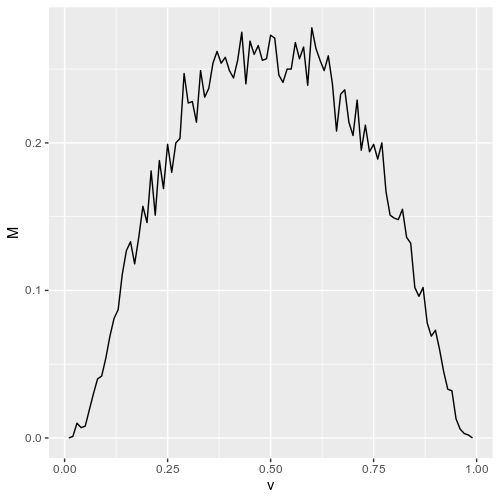 It is clear, why this happens. If the parameter becomes closer to $0.5$, then these two models become indeed more similar to each other. However, is there any method to rectify this problem?

This problem appears as part of a broader analysis. In the complete analysis, I actually have two models, similar to $v_1=1-v_2$ vs. $v_1=v_2$ and I want to distinguish between those two models using MCMC. Because I am not sure these two models adequately describe my data, I also added a model where $v_1$ and $v_2$ are independent (basically to leave those examples as unclassified). However, during analysis, I found that the parameters are distributed differently for the two groups, so I have a higher rate of misclassification (as unclassified) in one of the groups vs. the other group.

Some more details on why I think this happens:

While in general one could just take this to be some kind of "identifiability issue", I don't think this adequately describes my problem. Of course, the more general two-parameter model can easily mimic the simpler model (they are nested), but in that case, the simpler model should be preferred because BF controls for model complexity. However, that only would explain, why the simpler model is chosen for some data produced by the more complex model (which is actually what I want, so not a problem), but not vice versa as in my example.

Rather, it seems that for some parameters of the simpler model, the data itself becomes less indicative of any of the models. This also seems to be specifically related to the use of binomially distributed variables here, because in the case of the simpler model the variance increases when $v$ approaches $0.5$.

If I plot the posterior log-odds for each model, it becomes more clear what is happening here: 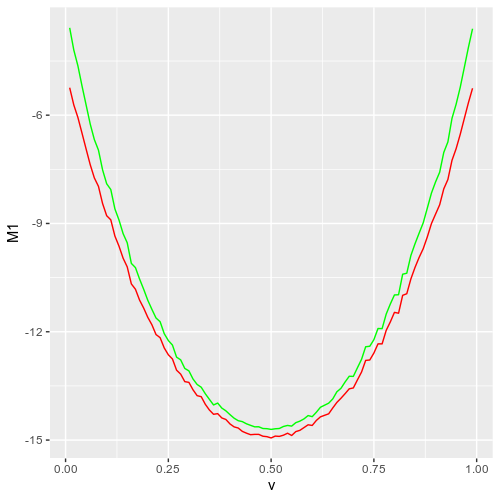 Both models become less likely as $v$ approaches $0.5$, but the drop is stronger for the simpler model, leading to a decrease of the BF.

However, is there any method to rectify this problem?

No, for the simple reason that this is not a problem, but a property of your models. Let's have a look at Figure 2-A (left panel) of the following paper. We have 2 models:

The binomial model has several parameters, including a value $\sigma$ (which is the variance of each Gaussian in the mixture, and hence the width of each "peak" you see in the figure). If $\sigma$ becomes too high, the peaks in the binomial model will overlap, and it will become very similar to a Gaussian distribution, and data generated from the binomial will be misclassified (the Gaussian model will provide a better fit).

That's very similar to your situation, where for $v$ close to 0.5, the complex model (with more parameters) becomes indistinguishable from the simpler model. However, the identifiability of a model is a function not only of its parameters, but also of the experimental protocol (i.e. the number of data points). Intuitively, if you increase the number of data points in your samples, the missclassification shall decrease (although it will remain peaky around 0.5)

I myself am working on this subject for my PhD project. Happy to discuss it any further !

I tried to obtain a formal proof for this intuition : Formal proof of Occam's razor for nested models

I think that is indeed what you observe on your first plot: while some data are misclassified, on average the BF is > 1.

Not the answer you're looking for? Browse other questions tagged bayesian model-selection or ask your own question.

4
Correct numerical result in Bayesian model comparison
6
Is it possible to compare the parsimony of models with the same number of parameters and explanatory variables?
4
How to compare two models of binomial distributions?
2
Bayesian comparison of differing model size