Signs of the lasso solution

Does the same hold for LASSO solution (the sign will be the same or they are zero)?

EDIT: It seems that for general $\textbf{X}$ it is possible.

Would it still be true for orthogonal design?

PS. It seems so from the geometry of the problem in 2d and 3d cases. Though I can not to show it for a general dimension.

There are two questions here. Let's look at the general one first: Is it possible for the Lasso to reverse the signs of estimated coefficients?

Taking the response to be

the OLS estimates for the model (with intercept, which is going to be part of the Lasso) are approximately

all of which are positive.

Using the glmnet package for R in its default (Lasso) mode produces sequences of estimates for a large range of possible $\lambda.$ The Lasso trace plots these sequences as line graphs. Given a design matrix x and response vector y, here is the code to produce the Lasso trace:

The horizontal axis reflects the size of the penalty ("L1 Norm") while the vertical axis represents the estimated coefficients $\hat\beta(\lambda).$ This plot is best read right to left: at the right the penalty is large because $\lambda$ is small (but nonzero, so the coefficients aren't quite the same as the OLS estimates). Scanning to the left, the values of $\lambda$ increase, putting more weight on the penalty and pushing the estimates to zero.

Typically, once an estimate hits zero it stays there. But this one is different: 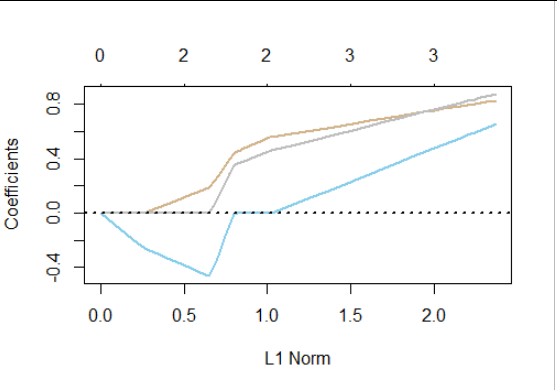 In effect, the Lasso is trading the second and third variables off for one another. This can be anticipated by examining the correlation matrix of $X:$

showing how strongly anticorrelated the last two variables are.

The second question asks whether the same phenomenon can occur when $X$ is orthogonal. The answer is no.

This analysis supports the claim in the first part of the question that the sign reversal must be due to the correlation patterns among the explanatory variables.

0
In Lasso, whether coefficient of a variable can become non-zero after it already shrink to zero?
1
Do any of zero coefficients become non-zero by increasing $\lambda$ in lasso regression?
11
Variable coefficient rises, then falls as lambda decreases (LASSO)
2
What is "step size" in LASSO regression?
3
Why regularization does not always reduce weights? (Michael Nielson's book)

16
What is the smallest $\lambda$ that gives a 0 component in lasso?
0
How is the lasso orthogonal design case solution derived?
0
Lasso and its dual: rates of regularisations
4
strange result from fused lasso estimator