Comparison of logit and probit estimations

There are a lot of questions concerning logit and probit relations (led by 20523), but I'm still confused with a seemingly simple issue.

In the typical case that $g$ is a symmetric density about zero...

As stated earlier, the error variance is normalized to $1.6$ for logit. Suppose the researcher normalized the probit to have error variances of 1, which is traditional with independent probits. This difference in normalization must be kept in mind when comparing estimates from the two models. In particular, the coefficients in the logit model will be $\sqrt{1.6}$ times larger than those for the probit model, simply due to the difference in normalization.

What is the difference come from? How do those approaches relate to each other? Is it the same correction after all?

Just some background first: For the probit model the estimated parameter $\beta$ and the error term $\epsilon$ within the context of $Pr(\frac{\epsilon_i}{\sigma} < x_i \frac{\beta}{\sigma})$ is assumed to have a standard deviation $\frac{\epsilon}{\sigma} = 1$, on the other hand for the logit model the same standard deviation $\frac{\epsilon}{\sigma} = \frac{\pi}{\sqrt{3}}$; this $\frac{\pi}{\sqrt{3}} \approx 1.8$ is indeed the standard deviation of the unit logistic distribution. That being said, pretty much empirically, the logit will fit better on the normal if we scale it by 1.6 instead of 1.8 across pretty much the whole of the curve. (Personally I think the approximation is underwhelming but potato potahto...) 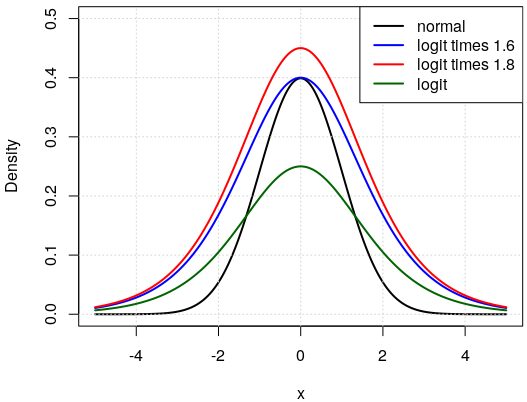 Now coming back to why $\sqrt{1.6}$ instead of $1.6$. Andrew Gelman had exactly the same question with you, talked with Dr. Train and got the following answer: "These are not two different parameterizations of the same model, with one parameterization being more common than the other. They are two different models, each with its own parameterization that is common for that model." His whole process is outlined in his 2006 blog-post on "Take logit coefficients and divide by approximately 1.6 to get probit coefficients". In short, Train referred to a model with error term $N(0,2)$. Therefore there was an approximate difference of $\sqrt{2}$ in the standard deviations; $\frac{ \frac{\pi}{\sqrt{3}}}{\sqrt{1.6}} \approx \sqrt{2}$. This is the root of the difference. The correction is essentially the same just the model utilities functions are different.

Not the answer you're looking for? Browse other questions tagged logistic normalization probit logistic-distribution or ask your own question.

364
Difference between logit and probit models

12
Marginal effect of Probit and Logit model
14
Binary Models (Probit and Logit) with a Logarithmic Offset
2
Estimating standard error in a probit: econometrics or programming problem?
1
How to compute the pdf for logit/probit models?
3
Logit - probit regression
2
Distinguish between probit/ logit