This is not really a question but more of a discussion. Please correct me where wrong and share your thoughts and past experience with regards to computing the likelihoods for continuous data models.

In In All Likelihood by Yudi Pawitan, there is a discussion on page 23 that briefly addresses the likelihood of continuous models.

The same does not hold for continuous data as a probability density function does not give you a probability of observing some given datum. I have seen four difference approaches to amending this.

Hidden Markov Models for Time-series by Walter Zucchini and Ian MacDonald uses interval censoring for some of their HMM's that have pdf for the emission distributions. Here, we accept that data must lie in some fixed intervals, starting from zero e.g. $0,0.01,0.02,0.03\dots$

This is simple to implement, acknowledges a sense of uncertainty or limited precision in the measuring instrument, leads to bounded likelihood and has meaningful interpretation.

We interpret this as the probability that a datum lies in a given interval. Our likelihood uses probabilities and is not ambiguous anymore. One can use this approach to compare different models as the log-likelihoods will lie in the same regions. Hence, the better model can be identified on the basis of this interval censored likelihood.

I like this method as it seems to solve all the problems.

On page for of this paper, one can find the "correct likelihood" remedy for our problem (although purely intended to fix the unbounded likelihood problem).

I did not understand this as first (I thought it looked like Method 3 but with division) but then realised that it will simply taking the derivative of the cumulative density function using the central finite difference formula in hope that it would be bounded if the epsilon is large enough.

It seems to give similar values to the original pdf. This is to be expected as as it is a finite difference approximation of it with the purpose of being robust against unbounded values if $\epsilon$ is large enough.

I see this approach as only fixing the unbounded likelihood issue. It does not fix the other problems. Using this approach, you will get very different log-likelihood values when comparing different distributions on the same data-set. 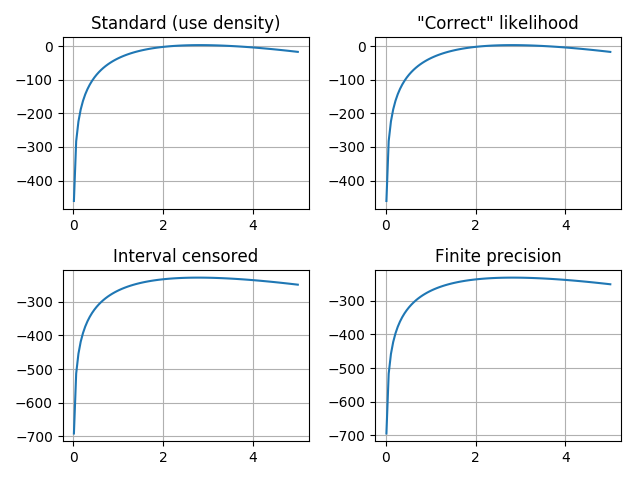 The Python Code to play with is given below. Note, you can alter it to use another pdf instead of say the Exponential and use it on the same data-set. This will show what I mean by Method 3 and 2 generate consistent log-likelihood values for different models near their optimal parameter setting.

I would use the finite-precision method over interval-censoring because it enables one to include the measurement error quoted by your measuring instrument.

Would you agree with this?