In my understanding, we use directed acyclic graphs to model causality in Bayesian networks. But it is common sense that there are feedback loops in life. How do we deal with this?

There is no "how 'we' deal with this", at least not yet. Causal modeling is still developing, and there is no one good answer to this question. People have tried different modifications for different objectives, such as mixing undirected and directed graphs, or converting to an undirected moral graph.

Still, I'm surprised I haven't encountered any discussion of the matter as I'm reading the expository articles on the subject.

A simple solution is commonly encountered in epidemiology. It's based on the fact that causation and time go hand in hand. For a variable $A$ to "feedback" to itself, time must be involved. In this way feedback can be accounted for if we incorporate time into an acyclic graph.

For example, the following simple diagram demonstrates how a variable $A$ at time $0$ can can affect itself at time $1$, possibly through some mediating variable $Z$ measured at time $1$: 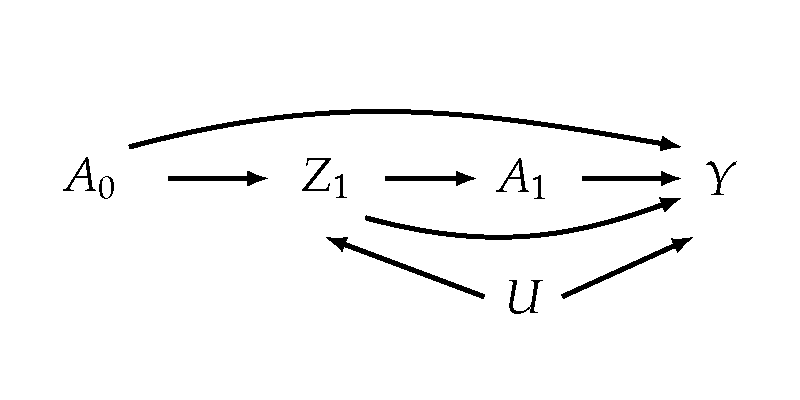 The above figure is a still a directed acyclic graph, as it meets all the required criteria. It is a standard example of time varying confounding affected by prior exposure, of which a defining characteristic is feedback loops between nodes.

There is a fairly substantial body of literature in epidemiology and biostatistics on strategies for analyzing data generated from such structures. These include many DAGs that incorporate feedback loops. Here are three:

Not the answer you're looking for? Browse other questions tagged references causality or ask your own question.