I have a question to setting up my lmer model.

I have measures of two groups of participants. Each participant was measured twice on two separate days (before and after; b_a). 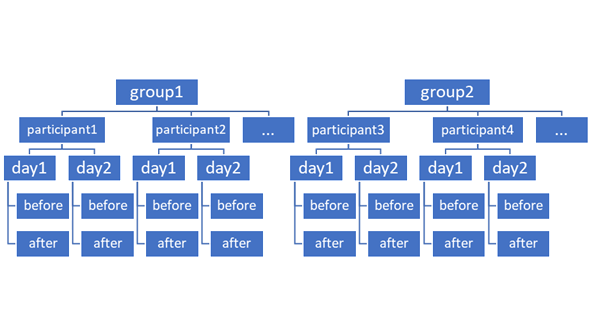 I want to find out if the treatment in group 1 leads to changes in the measurement “before" and “after” and if the effect changes from day1 to day2. So, I am interested in the interaction of group * day * before/after. If I understood correctly, then my fixed effects structure is clear. Though, I am not sure about the random effects structure. My suggestion for the model would be:

… apparently this is the same as

at least the output is the same…

My first question: Is this the correct model?

My second question would be: If it is, then why does my RManova (with ezanova) give me different results? (can this have to do with the different calls summary(model) vs anova(model)?)

Thanks in advance for your help!

First: You can leave out the 1+ part, as the intercept is always fitted unless it is explicitely disabled.

Next: If I understand your goal directly, you correctly identified the fixed effect structure. Let's work on the random effect structure. There are two things to consider: What kind of grouping do you have, and what can differ in this grouping. Grouping is done in your design by separating participants into two groups (probably experimental vs. control), by each participant being measured multiple times, and by the different days. Since you are interested in the difference between the two groups, this is a fixed and not a random effect. Similarly, you are interested if there is a difference between the two days, so again, this is a fixed effect.

This only leaves the subject as a valid grouping. Since you don't seem to be interested between differences in the participants, this is a random effect. Random effects are always given with |..., so you need a |subject in your random effects structure (which is missing the second part.

Now some points on the fixed effects: When you write group * day * b_a that implies you are including all main effects as well as their interactions. If you randomized your groups, there is absolutely no reason to expect a group main effect. While it often doesn't hurt to keep it in, there can be some cases where this can lead to bad model fits. You should monitor convergence and significance of this predictor, and if it becomes significant (or does not converge) you should be very skeptical of the model.

However, because you have grouped subjects into two groups, you should be expecting differences between subjects that are not just random fluctuations, but rather related to the manipulation. Thus, between-subject variances may be overestimated and effects may be underestimated. Also, if you only have four measurements per subject, you may not be able to reliably estimate the between-subject variances. So you might have to thin out your random effects structure later to get the model to converge (you can also try dropping predictors, that you know should be zero).

If you want to be simplistic (complicated random effects structures often require many models to be tried out, and this can greatly increase researcher dfs), then (1|subject) also is quite acceptable.

Not the answer you're looking for? Browse other questions tagged r mixed-model lme4-nlme or ask your own question.