How to find the difference between two set of scores of a single participant?

What I am trying to do?

I have a data set which consists of only one undergraduate student's all courses scores. Let's assume, he has completed about 70 courses where 40 courses are related to science and remaining 30 courses are related to arts. Score range of each course is 0 to 100. I am interested to find whether there exists any difference in scores of science and arts related courses. Therefore, I have divided the data; in one group (arts) of data, there are 30 values and in another group (science), there are 40 values.

What did stop me to find the difference?

Note: I have followed repeated measures related different questions of SE including this one and this one. However, I feel sorry to say you that I did not find the answer of my question.

Here is a test data set which is relevant to the described data set in my asked question. I prepared this using Python.

The independence requirement for the t-test is not really relevant here, as you have only one students's data (If you had data for more students, that would be more of an issue) ... but there is also an assumption of normal distribution and that is also doubtful here. You cannot use a paired test as this is not paired data.

I would here use a permutation test. Under the assumption that the scoring is the same for science and non-science courses, the labels science, non-science is just like they were attached arbitrarily to the courses. So you can simulate the permutation distribution of the difference of the means, say, by permuting the labels, say, $R=9999$ times, and each time compute the differences of the means. Draw the histogram, and over that, draw the observed difference as a line.

So with your example data: First, one should always do some visualizing of the data. For your data, parallel boxplots with data values overlaid is a good choice: 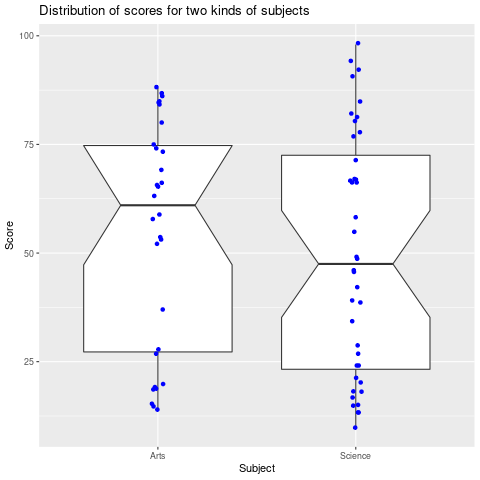 Then we do the permutation test, based on difference in means of the two groups.

And we can show the results graphically: 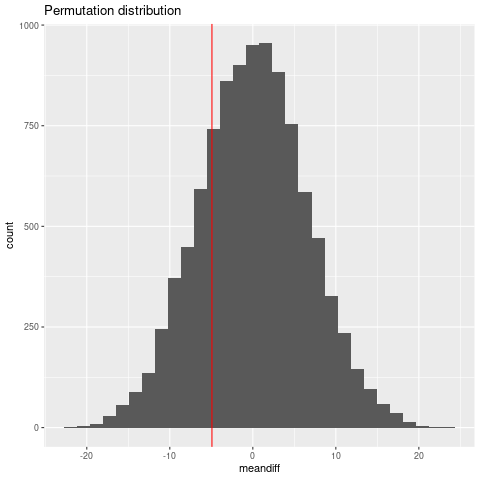 with the observed meandiff as a red line.

Another question in comments:

This is opening a can of worms ... the paper (a review Joan F Box' biography of her father) contains:

There is a difficulty---not described by Box---with randomization and permutation tests as they are usually worked out when the experimental layout is at all complex: for example, if it is a two-way layout. The permutation test typically is based on what might be called the null null hypothesis3 of identical treatments, or at least identical distributions for the treatments. Yet another of Fisher's great contributions is the idea of factorial design with its associated analysis of vari- ance, in which various kinds of treatments (e.g., row and column treatments) may be looked at separately. (See, for example, the discussion on analysis of variance on p. 110, or of factorial designs on pp. 164-166.) So here we have a secondary paradox within the larger one over long-run support for randomization. Indeed, the obscurity about no treatment difference as the basis for a permutation tests and the untangling of treatment differences by different factors, interactions, and so on, lay at the core of the first major confrontation between Fisher and Jerzy Neyman (Neyman 1935). Neyman in effect pointed out the paradox, and Fisher retaliated ferociously.

You might consider asking a separate question about this!

For the record, the code for the plots:

Not the answer you're looking for? Browse other questions tagged t-test wilcoxon-mann-whitney group-differences nonparametric or ask your own question.

108
How to choose between t-test or non-parametric test e.g. Wilcoxon in small samples
58
Why is ANOVA equivalent to linear regression?
4
Paired t-test when each data point was repeatedly measured different number of times?
4
Wilcoxon signed rank test independence assumption
1
Can we use permutation test everywhere to check difference when the null hypothesis is “there is no difference between two groups of data?”
1
Dependent t-test for matched pairs vs repeated measures