How to analyze if a specific event caused an increase in coronavirus cases?

I'm going to post a question related to the current events and I think it could be very interesting.

In the midst of the crisis with the coronavirus, Croatian capital of Zagreb was hit by a strong earthquake on March 22. Since a lot of people escaped their homes in panic, there were fears that the earthquake would cause an increase in the cases of coronavirus since people didn't obey the rules of social distancing when they escaped outside due to the earthquake.

The Director of the Croatian Institute for Public Health, Krunoslav Capak, said that they conducted some preliminary analyses that suggest that the earthquake didn't cause an increase in the number of COVID-19 cases. The analyses are preliminary becuase the incubation period of the virus is known to be as long as 14 days, so it's possible that the effect is not visible yet.

Regardless of the incubation period length, I was confused by Capak's statement because I cannot think of a statistical method I would use to make that inference. Does anyone know what analyses was Capak referring to? What statistical analyses would be appropriate to determine if there was an increase in the number of COVID-19 cases in Croatia due to the earthquake?

The number of coronavirus cases in Croatia can be found here: https://github.com/viborccom/data/blob/master/covid-19/croatia/time-series.csv?fbclid=IwAR2ekRN44WnKwlTQJAgpfYyJTz01GedrqJupB28d-g_KoGBnroIGWt8Jb58

You might wonder whether an increased infection rate during a short period could be observed in the figures of reports on infected cases or the death rate.

However, this is not feasible with the data available

*A simple model that shows how the reduction in the long-range transmission is having a strong effect and going on the streets and have local community spread is slightly less worrisome. I used the code from this answer which made used of a $R_0$ for short distance transmission and a $R_1$ for long distance transmission. I did two computations, one with $R_1 = 0.25 , R_0 = 2.25$ and one with one with $R_1 = 0 , R_0 = 2.5$. The total reproduction rate, $2.5$, is the same, but the models deviate quickly once the infection reaches the edges of the neighborhood. 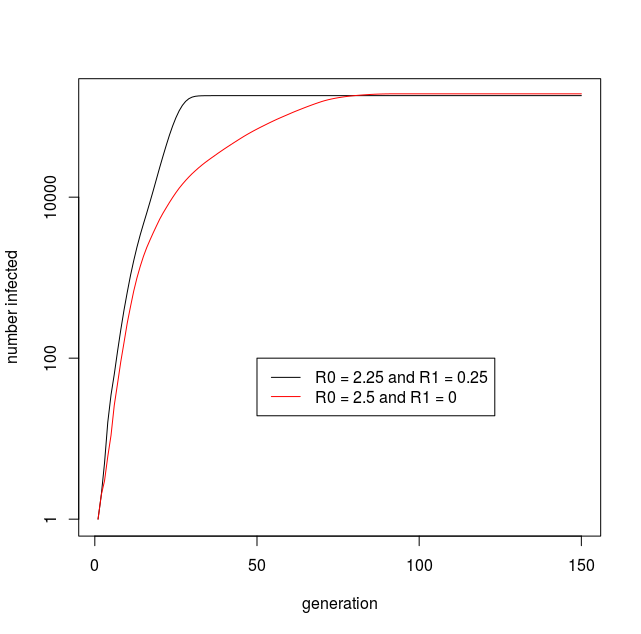 **In the Netherlands the officials were counting on a very specific rise of cases in the Intensive Care. Now... they are surprised that it did not turn out to be that specific number and it is a larger number than predicted (they were expecting 1600 people in the Intensive Care at some date, and not this is gonna happen a week earlier than expected)

Me... I am surprised that they are surprised about the number turning out to be different. These sort of predictions should have been made with a very wide confidence interval indicating that there is very little certainty about the forecasts.

9
Is there a way to calculate the riskiest places to be infected by COVID-19?
7
Detailed description/scripts of mathematical models for Coronavirus