Some of my data is not normally distributed, what test should i use?

When testing for normality and homogeneity of variance in SPSS, it showed this: 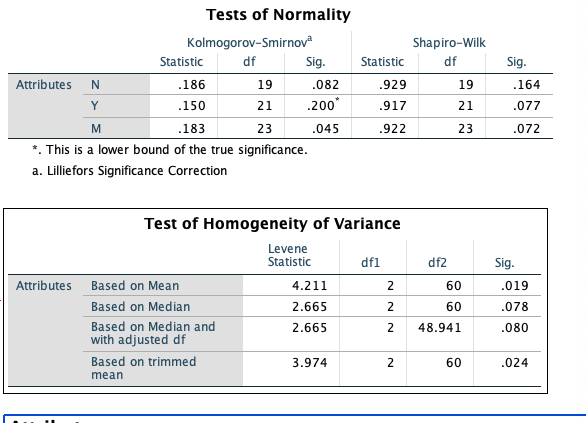 If I go by Kolmogorov-Smirnov, than the 'M' data is not normal, but if I go by Shapiro-Wilk, they all are normally distributed. However, the test of homogeneity of variance shows that based on the Mean and based on the trimmed mean, equal variance is not assumed. I know this would change which Post-hoc test I use for BG Anova but I'm not sure how it would affect my data if I use a Kruskal-Wallis Anova?

Should I use a Kruskal-Wallis ANOVA or a 1-way Between Groups ANOVA?

With such relatively small samples, I would not expect definitive results from either the Shapiro-Wilk or the Kolmogorov-Smirnov tests. Usually, the latter has poorer power than the former so I wonder why K-S (alone) finds group M data non-normal. Even though all six of the P-values for normality tests are about the same, I would want to see whether there are far outliers in any of the three groups; if not, I would not worry much about nonnormality.

I think your main problem may be heteroscedasticity, and I would use an ANOVA procedure designed to take possibly-unequal group variances into account. You may be familiar with the Welch two-sample t test, which does not assume equal variances of the two groups. In its procedure 'oneway.test', R implements a one-way ANOVA that does not assume equal variances. (Adjustments for unequal variances are similar to those of the Welch t test.) I would use this test in preference to a Kruskal-Wallis test because that test explicitly requires populations to be of the 'same shape', which implies 'equal variances'.

I do not know whether SPSS has implemented a one-way ANOVA procedure that does not require homoscedasticity.

The "Welchified" one-way ANOVA test finds significant differences among groups at about the 2% level of significance. (In a standard one-way ANOVA the denominator df would be 57; here ddf are about 31, adjusting for heteroscedasticity.)

Ad hoc Welch two-sample t test show groups A and B to differ at the 2% level (so, of course, A and C differ also). There is no significant difference between B and C. According to the Bonferroni method of protecting against false discovery, it is reasonable to conclude that A differs from B and C.

Perhaps your data are sufficiently similar to my simulated data that your data can be profitably analyzed using the methods I show above.

Not the answer you're looking for? Browse other questions tagged mathematical-statistics statistical-significance anova descriptive-statistics normality-assumption or ask your own question.