Statistical illusion? What's statistically happening, when regression analysis results get significant only with all predictors and interaction term?

I got a research question, where the hypothesis (derived from theory) postulates, that the relationship between predictor X and outcome Y is moderated by W (X+W+X*W -> Y). All variables are sums of likert-scaled items and treated as interval/metric. N=34.

Ignoring stepwise inclusion of variables, I just did a moderation analysis according to the hypothesis and found that everything is hypothesis conform. R-Squared is .20 which is low but expected because other, not included factors are known.

But when I just check the "lower" regressions, i.e. X -> Y, W -> Y and X+W -> Y, then all coefficients are close to zero and none is significant (p-values are incredibly high, p>0.6) and R-Squared is very low also.

What is happening here? Is the expected outcome of the high level regression with interaction term just a statistical artefact? I would like to understand what may be the reasons for this cumbersome result. And also I would like to know if/how I can interpret the results. 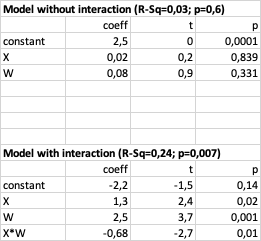 Your results illustrate the importance of interaction terms. This is no "illusion"; this phenomenon might be expected whenever the effect of one predictor on outcome depends on the value of another predictor.

The cookie-yield example in the Wikipedia entry on interactions in statistics provides an easy-to-grasp illustration. The outcome is the yield of "good" cookies (neither overcooked nor undercooked) as a function of oven temperature ("low" versus "high") and time ("short" versus "long") as predictors. In that example, neither temperature nor time--even in an additive model without the interaction--was associated with cookie yield.

So your hypothesis that moderation was important in your case is supported. If anything, the lack of significance of the predictors in the additive model shows how wise you were to include the interaction term based on your knowledge of the subject matter.

I agree with EdM that this is not an illusion, but rather a demonstration of the importance of considering nonlinear models.

The negative sign on the interaction term slope may be important. The simple slopes implied by your interaction model results are

You don't say whether X and W are centered about their mean. Depending on the ranges of X and W in your data, it is quite possible that the near-zero no-interaction slopes are highly descriptive of the mean values for the simple slopes in the interaction model. If the mean of W is about 2, and the mean of X is about 3.5, you would be right there.

Not the answer you're looking for? Browse other questions tagged regression statistical-significance multiple-regression interaction or ask your own question.

34
Why could centering independent variables change the main effects with moderation?
2
Can I remove significant interaction variable in regression model?