I am trying to do some significnce testing using Python statsmodels.

I have compiled two tests using OLS and weightstats.ttest_ind on the same data. My dataset contains one independent variable with values 0 and 1 and a continuous dependent variable. The number of 0 and 1 values is unequal which is why I used the option usevarstr = ‘unequal’ for the t-test. This yielded different outcomes between OLS and t-test. Running the t-test with usevarstr = ‘pooled’ however gave me the same results as OLS, except for the p-value. I do not understand why the p-values is so much higher in the t-test. 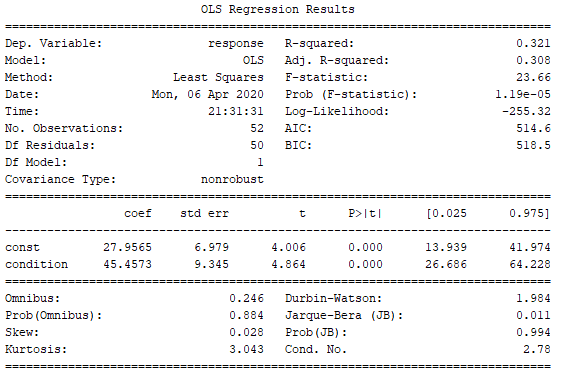 Is there an option in statsmodels OLS that is equivalent to t-test with unequal distribution? And if not, can I rely on the results I am getting now although they assume equal distribution (as far as I understand it)?

Or maybe there is something esle going on that I am missing?

usevarstr has to do with the variance of the two groups, not the sample sizes. This makes sense. The computer doesn’t need you to tell it if the sample sizes are uneven; it has the samples and can determine that itself. However, it does not know if you’re assuming equal or unequal population variances in the two groups until you tell it.

Since you only have one variable (plus the intercept parameter) the Prob(F-statistic) is the p-value on the parameter for your group variable. It just gets rounded down to zero in the chart below.

Not the answer you're looking for? Browse other questions tagged t-test least-squares statsmodels or ask your own question.