The arrival times of customers in a bakery can be modeled by a Poisson process (Nt)t≥0 with some rate λ > 0. On average, there are four arrivals per unit of time.

I want to ask about the question above what does it mean by "four arrivals per unit of time" and how can I get the rate(lamda) by just knowing the above information?

Your question is a good one. It is somewhat vague to say that the number of customers in a bakery can be modeled by a Poisson Process. To understand what that means, imagine this exercise:

where lamda stands for the expected number of customers during any 5-minute interval (as Ed V pointed out); this is what you are given as the average number of arrivals per unit of time.

Let's look at a couple values and compare the relative frequency from our sample with the predicted probability by the Poisson distribution function.

X=0 In our sample, we saw observed 0 customers in 100 of 1000 5-minute intervals, hence with a relative frequency of 0.10. On the other hand, the Poisson distribution predicts that

we would see 0 customers during 1.83% of the 5-minute intervals.

X=1 In our sample, we saw observed 1 customer in 200 of 1000 5-minute intervals, hence with a relative frequency of 0.20. On the other hand, the Poisson distribution predicts that

Here is a picture from Wikipedia of what a theoretical Poisson distribution with a lamda=4 would look like. 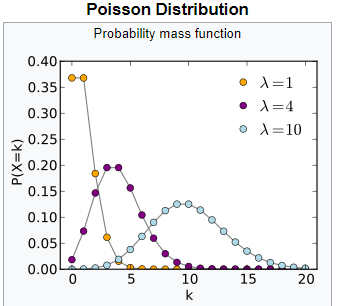 In my contrived example, it doesn't look like the number of customers at the bakery is modeled well by the Poisson. What could be wrong (aside from the fact that these numbers were completely made up)?

The fact that the arrival of customers at a bakery can be modeled by a Poisson process says that there is some interval of time, (like the 5-minute long interval we used above), such that if we counted the number of customers arriving during those intervals, and calculated those relative frequencies, they would be close to those predicted by the Poisson distribution function. But notice that we are not told what that interval is. It could be 2.5 minutes, 0.7 minutes, or 0.05 seconds. This magic interval length has to be such that if we imagined dividing it into n non-overlapping sub-intervals, where n is large: a) the probability that 2 or more events (in our case the arrival of customers) occur in any given sub-interval is essentially 0, b) the events occur independently, and c) the probability that an event occurs during a given sub-interval is constant over the entire interval (dependence between intervals ok but not within intervals).

Not the answer you're looking for? Browse other questions tagged mathematical-statistics poisson-distribution or ask your own question.