One could then perform block averaging to visualize how the SEM approaches the true value while using larger and larger block sizes. Using skimage.measure.block_reduce to do the blocking shows the following, and you might guesstimate the SEM to be around 0.4: 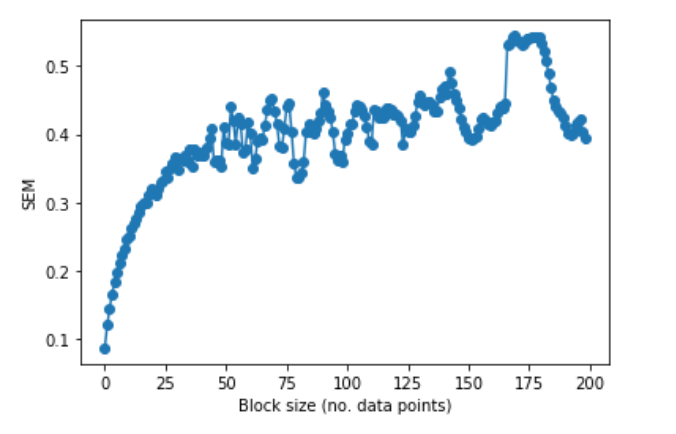 However I'd rather use the autocorrelation since block averaging has a bunch of arbitrary choices - when do you decide the SEM has converged? From which measurement do you start the blocking? Also block averaging requires removing the data that doesn't fit into a block, which seems wasteful.

Alternatively, autocorrelation can be estimated by a bunch of methods, for example in numpy:

Pretty close to the true value. Or perhaps autocorrelation is found by fitting an AR(1) autoregressive model. I used pymc3 to do that but the code isn't essential for the question, and it generates an estimate for the autocorrelation consistent with the above.

So at this point, how does one determine the SEM given the estimated autocorrelation? Thanks!

Seems as if "effective sample size" is a suitable concept for you to look at, in particular the formulae for $Var(\hat{\mu})$ and $n_{eff}$.

A remaining problem however is the fact that your (auto)correlations are not uniform but lag dependent. To solve it you may employ the magnitude of the sample correlation matrix (i.e. the summed entries of the inverse correlation matrix), which is obtained immediately from the results of the autocorrelation analysis.

The overall approach is nicely explained in great detail here

which is also a reference in the above wiki link.

After posting this I went on a long tour of all the techniques to calculate SEM for autocorrelated data like timeseries. I wrote up the full version including a comparison at: https://ljmartin.github.io/technical-notes/stats/estimators-autocorrelated/

The full code for this is:

The correction factor is known analytically from the equation for an autoregressive AR(1) process (see ref below) and works well when you have sampled for at least about 10-20 multiples of the autocorrelation time. Knowing the autocorrelation time is a different question but in practice try halving your data and see if the SEM is that different - if it is then you don't have enough.