I was analysing a distribution. I have attached the link for the list. 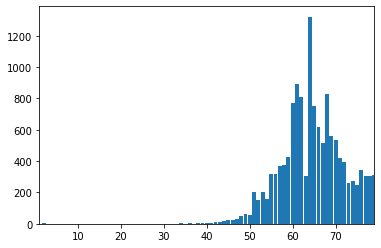 Now I was evaluating the skewness of the distribution. First I used the basic formula of skewness.

Then I used Pearson's formula for skewness ie.

Overall, I want to know why there is a difference in the report of both the formulas and the general conditions where Pearson's skewness formula will come at conflict with the traditional formula.

The problem lies in the first instance in using the same name for different constructs.

Suppose that you devise an intelligence test, and I do too, and we both call our test results "intelligence": for short, and because we are not innocent of desires to become slightly famous for our work and need a sales pitch, or even wish to make some money out of our tests.

Nevertheless there is no name magic that makes either test -- either measure -- the single, indisputable, incorrigible measure of intelligence. We should not expect that even rankings will coincide if the two tests are administered to a group of people.

So too with skewness.

The first measure is moment-based skewness, made famous by Karl Pearson, even though he used other measures too, and T.N. Thiele used the same idea earlier. The second measure also goes back to Pearson, although the factor of 3 is just ad hoc to make results comparable with yet another measure he liked, based on mean and mode.

Different criteria of skewness won't necessarily agree. Each is a reduction of information to a scalar, and different reductions ignore different details.

To get back to the beginning: We often write statements like

but the equals sign here is rhetorical. What we should be saying is captured better by a notation that I believe has its origins in Algol's use of :=, and the need to distinguish assignments from tests of equality.

What comes first is the recipe, and any names we use are just conventional. Call the beast an aardvark and it still behaves in the same way.

Here definition is not claiming an unequivocal grasp of a concept, but just declaring a name that is convenient, just as in some very elementary algebra such as

we are clearly not defining the essence of $x$ but just setting out notation useful for the current purpose.

Not the answer you're looking for? Browse other questions tagged normal-distribution skewness or ask your own question.

7
Proof / derivation of skewness and kurtosis formulas
4
Difference between skewness formulas
3
Are two samples with skewness equal?
6
Skewness Kurtosis Plot for different distribution
0
Difficulty in calculating skewness
0
Are Skewness and Kurtosis Sufficient Statistics?
1
Is there such a thing as a trimmed skewness estimator?
2
Theorem name? Skewness of repeated samples = skewness of the population