Hypothesis test for comparing means of many groups, with unequal variances?

I am looking for a hypothesis test to compare the means of many groups similar to ANOVA or Kruskal–Wallis. The problem is my data does not meet the necessary conditions for these tests having significantly different variances (I tested this with Bartlett's Test) meaning I cannot use ANOVA and the data is not continuous so I cannot use Kruskal–Wallis.

Other Characteristics of the Data:

It is also worthwhile to note I will want to do some post hoc tests to find if the greatest result is significant compared to the rest, and therefore if there any tests that I can perform to directly compare the group with the highest mean to the rest that my data would work well with, that would also be helpful. Ultimately I want to find if a given group, or multiple groups, is significantly greater than the rest.

In R the test implemented in oneway.test does not assume equal variances. In somewhat the same way that the Welch 2-sample t test accommodates 2 groups with possibly different variances, this ANOVA procedure handles $k \ge 2$ groups.

Notice the reduced denominator DF. A standard ANOVA would have DF(Resid) = 27.

If the null hypothesis is rejected (as in this example), you can use Welch t tests for ad hoc comparisons---along with the Bonferroni (or other) method of avoiding false discovery for multiple tests.

In my example, there is no significant difference between groups 1 and 2.

But there is a highly significant difference between groups 2 and 3.

Boxplots give an overview of the data. 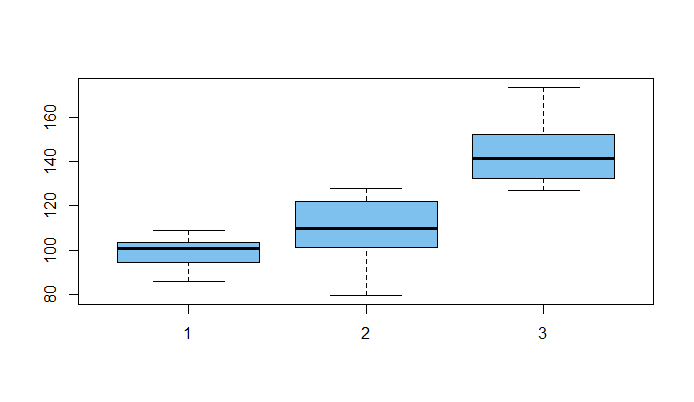 Not the answer you're looking for? Browse other questions tagged hypothesis-testing anova kruskal-wallis-test or ask your own question.

4
Test if differences between frequencies is significant
6
Contradicting p-values for Anova and Kruskal-Wallis on same data: Which is right?
8
Multiple comparisons with many groups
1
Comparing the means of 6 groups, binary dependent variable
2
Low number of observation while comparing means
1
Comparing heteroscedastic groups with sample sizes from 1 to 24… No valid tests?