I created a short Monte Carlo script to check how z-values from z-tests and their correspond when I change different parameters.

My script is the following. I have a "population" of normal distribution, with mean 20 and SD 4. Then I take random samples, calculate the z-value of the hypothesis that mean=20 and the corresponding p-value. I do that "experiment" 1000 times.

The code is the following:

Then I run the following codes. Also my comments:

This equals as expected the previous formula.

But when I try to plot the histogram of my p-values list I get a uniform distribution.

I don't understand exactly where is my error. I expected that my histogram should have a left-skewed distribution, since most of p-values are above 0.05.

Thank you in advance for the explanation. 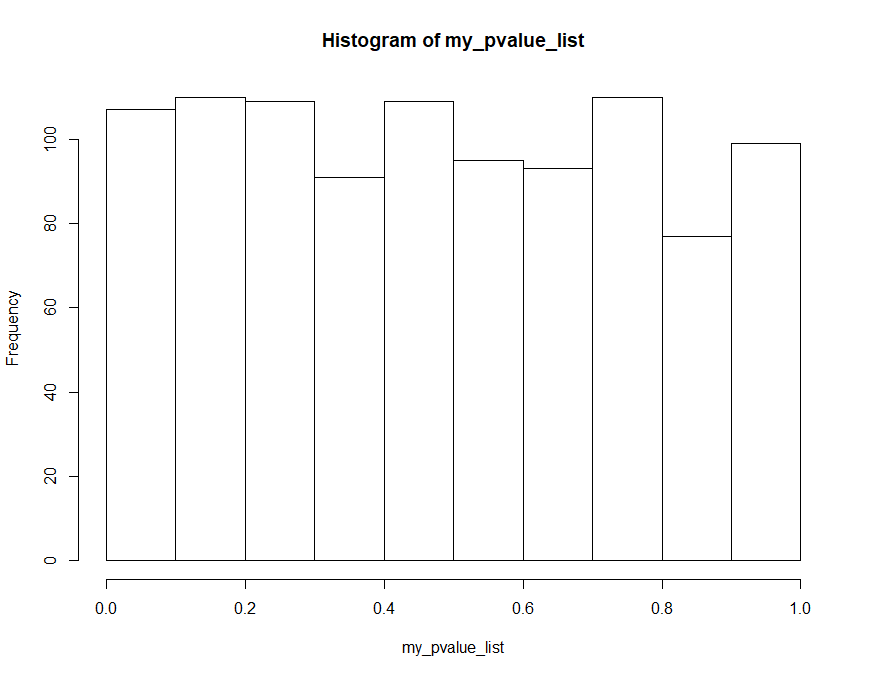 Everything looks fine to me! Only the bar at the very left contain the p values up to 0.05 (and some more). So roughly 95% of p values are above 0.05, which is as expected under the null.

Actually, if you simulate more and more p values under the null, the distribution will approach perfect uniformity. As soon as you start sampling under the alternative hypothesis, then you will get a heavily right-skewed distribution (and many small p values).

160
Why are p-values uniformly distributed under the null hypothesis?

10
How to test the statistical significance of AUC?
6
A non-uniform distribution of $p$-values...again
4
Interpreting normality tests results
3
How to sample from a distribution so that mean of samples equals expected value?
1
Coverage probability for Wald confidence interval with small sample size
1
Random walk variance in R less than expected