How to find if the means of multiple groups are significantly different when the data is of non-normal distribution: Kruskal-Wallis?

I have dive data from ten shark tags. The tags recorded depth every 10 seconds while at liberty and returned a combined total of >900 k depth records. I would like to see if there is a significant difference in the mean dive depth depending on the size of the shark. There are five size categories. Ideally, I would like to apply a 1-way ANOVA, however, ad.test() indicates that the dive data is on a non-normal distribution (the sample size is too large to test via shapiro.test()). I attempted to log(y+1) transform the data (results below) but it still failed ad.test(). 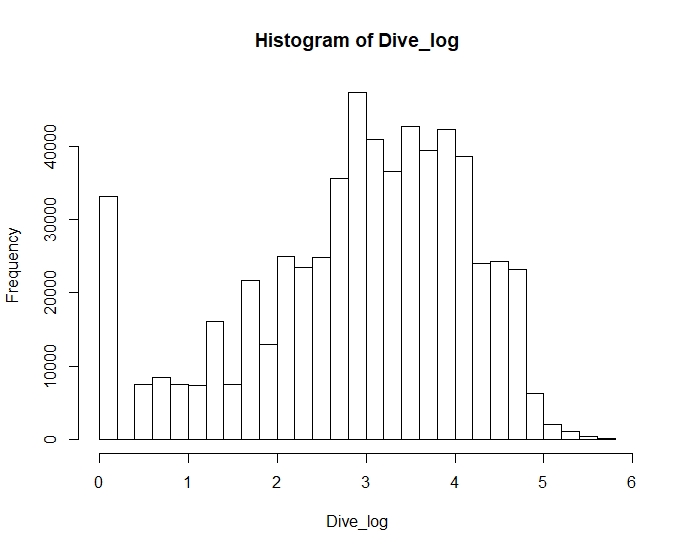 I read that a Kruskal-Wallis test is a non-parametric alternative to a 1-way ANOVA, e.g. here which should be followed by post-hoc analysis. However, although sources recommend a Kruskal-Wallis test as a non-parametric alternative, they also say that it tests the median rather than the mean, e.g. here. Am I using an incorrect test? If so, how can I find out if there is a significant difference between the mean dive depths for each shark size category when my dive data is of a non-normal distribution?

For reference, I have included the script below.

Without seeing numerical and graphical descriptions of dive depths it is difficult to give advice with confidence it is relevant. If you have over 500,000 observations and five categories, then I suppose there must be tens of thousands of dive depth observations per group.

This makes it tempting to suppose that your group means will be roughly normal [see note below], so that an ANOVA would give useful results.

Equal variances? In these circumstances I would worry whether group variances might be grossly unequal. Even with large numbers of replications in each group, this would invalidate a standard ANOVA. Also, an assumption of the original K-W test is that group populations have the 'same shape', which implies equal variances. (Maybe some recent implementations of K-W allow for relaxing this assumption, but you would need to investigate that.)

Simulated example with exponential data: If your data were exponential, I suppose you would have found a helpful transformation, but I will use exponential data in an exploratory simulation below: In R, exponential distributions are parameterized by the rate $\lambda = 1/\mu.$

Boxplots give an overview of the data. The red X's show the five group means. 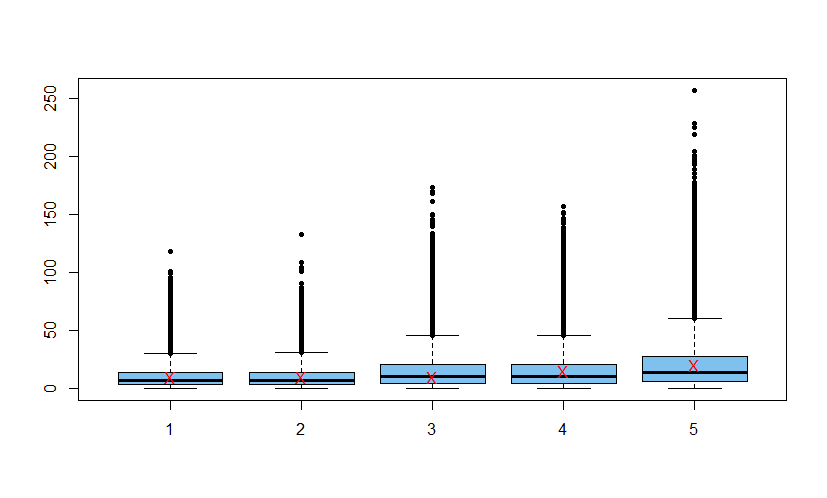 Not the answer you're looking for? Browse other questions tagged r anova mean nonparametric kruskal-wallis-test or ask your own question.

24
Is there an equivalent to Kruskal Wallis one-way test for a two-way model?
0
Is dunn.test a suitable alternative to kruskalmc in pgirmess package?
0
Non parametric analysis
5
Post hoc for Kruskal-Wallis Test
3
Two-Way Non-Parametric Test for Non-normal Data?
0
Why does the Kruskal Wallis test shows a difference but Wilcoxon doesn't find any between the groups?
4
How to plot the results of a Kruskal-Wallis or a Welch's ANOVA?
1
Is Dunn-Sidak approach in MATLAB multcompare identical to so-called Dunn's test?